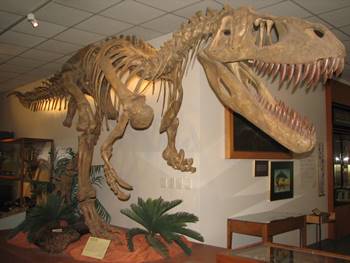 For many years, the paleontology program at Brigham Young University revolved almost entirely around one man, “Dinosaur Jim” Jensen, a prolific field researcher with a talent for finding fossils.  In 1976, the University built a museum to house his huge collection (over 120 tons of fossils) which had previously been stored underneath the nearby football stadium, and the resulting BYU Museum of Paleontology displays many of those finds.

When the museum opened it was called the BYU Earth Science Museum, but has since been renamed the BYU Museum of Paleontology.  The building is relatively small, but is large enough to store most of the Jensen fossil trove.  In addition, the museum is able to display quite a few nice fossils and casts of prehistoric creatures and provide a large working lab where volunteers and undergraduates can work to prep some of the best fossils from the collection.

Visitors might be surprised at how many dinosaurs and prehistoric creatures are displayed in this relatively small building.  One of my favorite dinosaur mounts anywhere is located not far from the entrance, and it is hard to miss.  The large, menacing cast skeleton of Torvosaurus looms nearby.  Certainly one of the largest predators of the Jurassic period, Torvosaurus had a huge skull filled with large teeth, and the pose here at BYU is great.  It’s a beautiful dinosaur skeleton, and it is displayed beautifully.  Originally excavated in 1971 and named in 1979 by Jensen and Peter Galton, Torvosaurus is significantly larger than the other apex predator from the Jurassic, Allosaurus.  One of Jensen’s many talents was using metal armature in new ways to display dinosaur fossils without showing the underlying metal rods and beams holding the fossils.  Jensen previously had mounted one of the great prehistoric fossils on display in North America, a huge sea reptile named Kronosaurus which can still be seen at the Harvard Museum of Natural History in Cambridge, MA.  The Torvosaurus mount at BYU is another beauty and certainly is a highlight of the BYU Museum.  A later species of Torvosaurus was described from a find in Portugal, and that dinosaur remains the largest theropod dinosaur ever found in Europe.

Another large predator from the same time period was Allosaurus, and the BYU Museum has a very nice one on display.  Allosaurus is one of the most studied dinosaurs thanks to a huge assembly of them that have been discovered in Utah’s famous Cleveland-Lloyd Dinosaur Quarry located about 100 miles or so to the southeast.  The BYU display is great; the specimen is a burly fellow and has an interesting gray-silver color.

Other full dinosaur mounts include a terrific Gastonia, a nicely posed Camptosaurus that appears to be running, and the sauropod dinosaur Camarasaurus.   The Camarasaurus is not particularly huge for a sauropod, and the specimen on display at BYU looks as if it is possibly a sub-adult.  Still, it’s a large and terrific fossil.  There are a few mounts of creatures from before the dinosaur era, including Permian period synapsids Dimetrodon and Edaphosaurus.

In addition to the skeletal mounts, there are numerous isolated bones on display throughout the museum.  From a Stegosaurus back plate to a huge femur from Supersaurus (another Jensen discovery), there are plenty of individual bones that are worthy of attention.  Skulls are usually the most popular, and there are several here to enjoy, including a Triceratops; a young centrosaurine ceratopsian, and a huge ancient crocodile Deinosuchus.  While the skulls are great, my favorite isolated bones on display here are leg bones from a popular dinosaur from the state, Utahraptor.  One entire leg is displayed in a glass case, and the “killing” claw (found on all dromaeosauridae) on the 2nd toe is very impressive, almost 9 inches long.  This was one scary dinosaur, much larger than any raptor-type (the dromaeosaur family) currently seen in other museums.  Only the recently discovered Dakotaraptor rivals it in size among the dromaeosauridae.

One of the nice things about the BYU Museum of Paleontology is that despite it being relatively small, it is packed with fossils and it features a large window that allows visitors to look in at the fossil prep lab.  The lab space is impressive for a museum this size, and both times we visited we saw several volunteers (undergraduate students?) working on fossils.  My children enjoyed this aspect of the museum quite a bit, and we spent quite a bit of time watching the work.  With the amount of material that “Dinosaur Jim” collected, there will be plenty of fossils to prep for a long time at BYU.

For many years one could find an amazing and important fossil in the museum, the skull of a very large mosasaur called Prognathodon.  It was discovered in 1975 by three 14-year-old boys.  Recently, the entire skeleton has been cast and is now on display several blocks south and east in the Eyring Science Center on campus.  A new study indicates that it is not a Prognathodon after all, but a species new to science that has been named Gnathomortis.  I have not seen it in person yet, but hope to the next time I visit.  The photos of this fossil that I have seen are very impressive, like the one below taken by Rachel Merrill.

If you’re not a fan of prehistoric fossils, you are not going to find much to enjoy at this small museum.  This is a paleontology museum that is filled with fossils and casts of fossils and not much else.  It doesn’t take a long time to get through the museum, so your time spent here will not take up a huge part of your day.   Right across the street behind the parking lot is the football stadium where the BYU Cougars play, and it has been open to the public both times we visited.  The views of the surrounding mountains from the higher rows in the stadium are spectactular.  Whether you like dinosaurs or not, I recommend a quick trip to the stadium, it’s certainly one of the most scenic settings in Division I college football.

The most obvious need for improvement at the BYU Museum of Paleontology is simple and common to most museums: they desperately need more display space.  The small building was constructed in 1976 in order to display some of Jim Jensen’s many discoveries, and to store some of the huge fossil collection he and his teams had amassed over many years of collecting.  With more display space, the BYU Museum could mount a number of other specimens from their collection, including perhaps a Supersaurus, one of the largest sauropods ever discovered in North America.

My children have been to the museum twice now, and they enjoyed it both times.  The first time we went, my youngest son seemingly spent about half his time sticking his head in and out of the giant Deinosuchus jaws, which he absolutely loved.  The Torvosaurus was popular with both boys, and we spent quite a bit of time watching the volunteers cleaning some fossils in the prep lab.  A quick trip to the museum could take a half hour or less; we probably spent closer to two hours here both times and enjoyed it quite a bit.

There are a lot of nice fossils at the museum, but it is relatively small.  My guess is that most visitors spend less than an hour in the museum.  We spent a little over an hour both times we have visited.

If you are in Utah and visiting some of the state’s great dinosaur places, add the BYU Museum of Paleontology to your list.  It is well worth the trip: the Torvosaurus is an amazing fossil and quite memorable and there are plenty of other great fossils to see.

Unique/New/Famous/Important Fossils on Display: (6.5 out of 10)