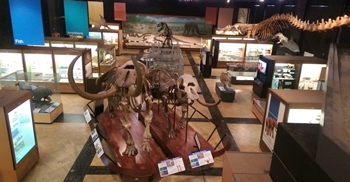 Located in the heart of campus in one of America’s great college towns, the University of Michigan Museum of Natural History features an amazing collection of fossils that span the entire history of life on planet earth.  Featuring the state’s largest collection of dinosaur fossils, the museum also boasts an incredible array of exhibits and displays that will delight visitors young and old.

NOTE: The University of Michigan Museum of Natural History opened in a new facility in 2019, the Biological Sciences Building.  I have not yet visited the new museum.   This review reflects the museum in its prior life in the Ruthven building.

I have visited the University of Michigan Museum of Natural History (UMMNH) more than any other museum, by far, primarily because when I was a Michigan undergraduate student, my first work-study job was working for a paleontology professor in the Ruthven Building that houses the museum.  Much of my first year on campus, I went to work in the halls of the building, back behind the museum exhibits.  I often stopped in to the second floor and hung out for a few minutes with some of my favorites in the Prehistoric Life gallery: the stately Allosaurus, the unusual Desmatosuchus, and my favorite fossil of them all, the Dimetrodon.

I still get to Ann Arbor at least once a year and invariably stop by the museum to check in. While many of my old favorites can be found just as they were when I graduated over 25 years ago, the museum has added a lot of new and interesting exhibits, many featuring animals collected by the university’s highly esteemed paleontologists.

The state fossil of Michigan is the mastodon, or Mammut americanum.   Two beautiful mastodon fossils stand in the center of the main fossil hall on the museum’s 2nd floor, “Prehistoric Life.”  Of the pair, the female is one of the most important mastodon fossils ever found–it is estimated that it is an astounding 95% complete.  This fossil was found in Owosso, Michigan, in 1944.  The mastodon next to it is larger, a male, and also a terrific example of the species.  They are a beautiful couple, even if they are often mistaken for the more famous “woolly mammoth.”  On the 3rd floor of the museum is a rare find: mastodon tracks.  They were unearthed near Ann Arbor by UM paleontologist Dan Fisher, an expert on mammoths and mastodons.  It is the only example of mastodon or mammoth tracks I have seen on display anywhere.  Soon the museum will display a mammoth that was found in 2015 in a farmer’s field about fifteen miles from Ann Arbor.

Of the many fossils currently on display, my personal favorite is a wonderful Dimetrodon.   A Permian period reptile, Dimetrodon is often mistaken for a dinosaur.  Not only is it not a dinosaur, it is actually more closely related to mammals, and is now commonly referred to as a “mammal-like reptile.”  Dimetrodon lived thirty to fifty million years before the first dinosaurs appeared.  Dimetrodon was an apex predator in its environment; its size and strength enabled it to hunt just about any other creatures around, including some fairly close relatives like herbivorous Edaphosaurus.  Because of its relatively delicate bone structure compared to other Dimetrodons, some theorize that the Michigan specimen is a female.  Whatever its sex, the fossil is fantastic, with near perfect proportions and a slight reddish color, a signal that it came from the “red beds” of Texas, where the vast majority of Dimetrodon fossils have been found.

In addition to Dimetrodon, the UMMNH has a wonderful collection of Permian period fossils, including a great Edaphosaurus, a Sphenacodon, and a terrific example of Diplocaulus.  Unfortunately for the denizens of this time period, the most devastating extinction event in earth’s history came around 250 million years ago and ended the Permian period.  The cataclysmic events that caused the Permian extinction resulted in over two-thirds of land animals perishing, while over 95% of marine life perished.  This great dying event left life on earth devastated for several million years but eventually ripe for new species to find room to grow and evolve.

The era known as the Mesozoic started after the terrible extinction, and the first period of the new era was the Triassic.  The Triassic is best known as the time when dinosaurs started to appear.  Before they ruled the earth, however, a variety of archosaurs were the apex animals that evolved into numerous forms.  At the UMMNH, visitors can see some of these, such as phytosaurs, or crocodile-like predators.  One very impressive archosaur displayed here is a fossil mount of a Late Triassic aetosaur called Desmatosuchus.  This herbivorous animal looks a little bit like a crocodile but had a small head to go along with its heavily armored carapace, with bony scutes on its back in rows that helped protect it from predators of the time.

Eventually dinosaurs overtook the archosaurs as the undisputed rulers of the planet, and the dinosaur collection at UMMNH has some wonderful fossils.  My favorite is probably the Allosaurus that stands in the middle of the back section of the display area.  This fossil, like many allosaurs in museums across North America today, originated in the Cleveland-Lloyd Dinosaur Quarry in Utah.  This king of the Jurassic stands with its jaws open and claws reaching menacingly towards approaching visitors.  Unfortunately, like many early Allosaurus mounts, it is no longer standing in a position that was natural for the animal according to modern scientific interpretation. Still, this is a wonderful fossil!

Other dinosaurs at UMMNH include well-known casts of favorites such as Coelophysis, and Deinonychus.  The Deinonychus is a particular favorite; it is shown in a very dynamic pose that highlights the active lifestyle of this dangerous predator which possessed a mouthful of sharp teeth and a wicked, sharp talon-like claw on the second toe of its hind feet.  It looked very much like the more famous Velociraptor, but was significantly larger (and capable of hunting large prey).

There are several dinosaurs displayed throughout the museum, highlights include a cast of a Tyrannosaurus skull, a skull of the ceratopsian Anchiceratops, and a large and impressive Edmontosaurus that is displayed lying on its side.  The museum also has a significant collection of pterosaurs and displays several.  A fossil Pteranodon can be found mounted high on the wall near the back of the exhibit, and several pterosaurs are mounted from the ceiling “in flight.”  There are also nice displays of South American pterosaurs such as Anhanguera and Tupuxuara.

If you are interested in the ancient seas, there are a lot of good specimens, including the Devonian period armored fish Dunkleosteus.  There are two terrific fossil mounts hanging from the walls near the back of the museum display, one is a mosasaur called Platecarpus, the other a particularly well-preserved ichthyosaur named Stenopterygius.

One of the displays that really sets the UMMNH apart from many museums is the fantastic display on ancient whales and whale evolution.  There are mounts of several ancient whales, representing many millions of years of whale evolution.  Whale evolution is a fascinating subject–it often surprises people to learn that whales originally lived on land and are most closely related to an ancient animal similar to the modern hippopotamus. Evidence of the terrestrial origin of whales can be seen in several features on animals displayed at the UMMNH.

One of the great fossils at UMMNH is that of Basilosaurus, an Eocene whale that lived between 30 and 40 million years ago, grew to sizes approaching 60 feet long.  The spectacular fossil at UMMNH is one of two full skeletal mounts I have seen; the other is at the Smithsonian’s National Museum of Natural History.

Other ancient whale fossils on display include Pakicetus, an important evolutionary link between land and aquatic cetaceans.  Pakicetus is small for an ancient “whale”;  it looks more like a large dog and was possibly completely terrestrial.  Nevertheless, Pakicetus had important traits that it shared with land and aquatic mammals.  A larger ancient whale called Maiacetus is also displayed; a fossil of this animal with a fetus inside demonstrated that it likely gave birth on land and showed that aquatic birth was one of the last traits that separated amphibious and aquatic whales.

If you don’t like fossils and aren’t terribly interested in ancient life, there are still some nice exhibits at the museum that might draw your interest.  The planetarium offers several shows daily, and there is a wonderful collection of modern animals from Michigan displayed on the 3rd floor of the museum.  My sons particularly enjoy seeing the vast collection of birds and picking out those they have seen in person.  Beyond the museum, the campus is always vibrant, and Ann Arbor is consistently rated among the very best college towns in America, with a plethora of shopping and high quality food options nearby.

Like most older university museums, the University of Michigan Museum of Natural History is challenged with older facilities and a lack of display space.  Fortunately, a brand new building is now being built nearby that will allow the university much more space and help bring some of the various university collections together in one building.  The museum in the current building is expected to close in 2018, and the new building is scheduled to open by Fall 2019.  There has been an impressive amount of collaboration with the community about suggestions for the new displays; I eagerly await the results!

Yes, my children enjoy visiting the UMMNH.  Just about every time we visit, there is a student docent in the lobby with a table full of interesting fossils or casts that the kids can look at, touch, and guess what they are and what they were used for.  It’s a nice touch; I think more museums could benefit from similar relatively simple yet memorable ways to interact with young visitors.  The museum runs several programs aimed at children, be sure to check their website before you visit.

The UMMNH has a broad and diverse collection that visitors will enjoy.  Next time you are in town just visiting campus or taking in a football game, stop in and check out some wonderful displays and fantastic fossils.  Go Blue!

Most visitors spend under an hour in the museum, although we typically spend an hour to 90 minutes on our visits.  If you just plant to visit the prehistoric fossils area, an hour should be plenty.

The University of Michigan Museum of Natural History is one of the top twenty-five museums in North America to see prehistoric fossils, and easily among the top ten college & university natural history museums.   I am eager to visit now that it has opened in a beautiful new building.