For the first Fossil of the Week feature I thought I’d focus on one of my favorites, an awesome ferocious dinosaur that doesn’t get nearly the public attention that it should.   Among huge apex predators from North America, Tyrannosaurus and Allosaurus have received most of the fame, but Acrocanthosaurus, is pretty awesome in its own right. 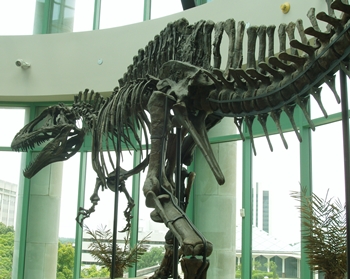 In geologic time, “Acro” falls right between Allosaurus (approx. 150 million years ago) and Tyrannosaurus (approx. 65 mya), dating to somewhere between 125 and 100 mya. A distant relative of Allosaurus, the skull is quite similar although somewhat larger. Science has known about T. rex and Allosaurus for over a hundred years, but while Acrocanthosaurus was discovered in the late 1940’s and first described in 1950, the most complete specimen was described in the 1990’s.   There have been far fewer Acro fossil discoveries than those of Allosaurus or Tyrannosaurus, so it is not surprising that Acro hasn’t yet taken off in popular culture, but that may change as more fossils are found of this impressive “high-spined lizard.”

There is no doubt that Acrocanthosaurus was among the most fearsome predators of its time: it was a huge dinosaur, about as long as a Tyrannosaurus, with adults likely reaching lengths close to 40 feet.  It was also tall and intimidating, with a large ridge of spines rising out of its back that most likely gave the dinosaur a large hump of muscle.  In the photo above, you can see the tall spines along the back.  These spines (along with the large skull full of sharp teeth) give Acrocanthosaurus one of the more impressive dinosaur skeletons!

Like Allosaurus, the Acrocanthosaurus had three fingers on each hand and very strong arms, probably used to hold prey while the Acro used its large and powerful jaws to slice open its victim.  While T. rex had massive, thick teeth for crushing bone, Acrocanthosaurus had smaller, more finely serrated teeth similar to Allosaurus. Acro probably used them primarily to cut and slice animals with numerous bites rather than crush them in one giant death blow.  However it dispatched its prey, it was certainly successful in its environment.

While only four or five separate Acro fossils have been discovered, it is clear that this dinosaur had a wide range throughout North America.  Remains have been found from Texas to Wyoming, and numerous large theropod tracks have been dated to the time period of Acrocanthosaurus and are likely to have been made by this animal.  The most famous of these can be found at Dinosaur Valley State Park in Glen Rose, Texas.

If you want to read more about this lesser–known large carnivorous dinosaur, I strongly recommend a new book (2016) by the great paleontologist Kenneth Carpenter called Acrocanthosaurus Inside and Out.