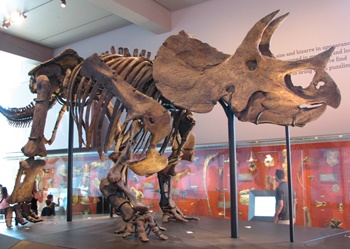 The Triceratops is among the most well known and beloved of all dinosaurs; only its ancient rival Tyrannosaurus might eclipse it in popularity.  With its prominent horns and frill, Triceratops is easily recognized and has been a star of the dinosaur fossil world for a long time.   Despite its popularity, not many museums have displayed an entire Triceratops mount.  This is largely due to the fact that while there have been a quite a few Triceratops skulls discovered, there have been far fewer associated bones and very, very few articulated skeletons.  In fact, most of the best specimens in museums are known to come from more than one Triceratops.  Fortunately we have learned quite a bit about this great dinosaur fairly recently, as a large research project studying the Hell Creek formation in Montana has unearthed dozens of Triceratops fossils.  Many museums display a Triceratops skull or cast of a skull, but if you’d like to see some great Triceratops mounts, here are the top places to go:

While the Triceratops in the Cleveland Museum of Natural History is a cast, it is a great looking dinosaur displayed facing his nemesis, the fearsome predator Tyrannosaurus rex. Located directly in the center of the Kirtland Hall of Prehistoric Life, the showdown between two of the most iconic dinosaurs always draws a crowd.

There are so many great dinosaur displays at the Royal Tyrrell Museum that it is easy to overlook some of them.  The Triceratops on display is one that is hard to overlook–it is a very nice exhibit, located near several other ceratopsian fossils.  The size and obvious strength of Triceratops really stands out when you are next to a full-size skeleton–this was not a dinosaur to trifle with.

(11) Canadian Museum of Nature, Ottawa, ON

The Ceratopsian display at the wonderful Canadian Museum of Nature is quite spectacular: full skeletal mounts of Triceratops and Styracosaurus are highlights, and several other ceratopsian skulls and fossils can be found in this display area as well.  The Triceratops is very nice, posed in a way that makes it look like it is grazing rather than the more common museum display where the Triceratops is usually seen fending off an attack from a Tyrannosaurus.  Personally, I am glad to see a mount like this since Triceratops undoubtedly spent a lot more time grazing than it did fighting.

The Triceratops at the Black Hills Institute is called “Raymond” and it is one of the most important specimens ever discovered–although only the right side of the skeleton was preserved, the fossil was the first (and only) Triceratops found fully articulated–in other words the bones were preserved next to each other in place.  This is important for many scientific reasons–it helps answer questions that scientists have had about how Triceratops walked and how its leg bones were arranged, among others.  “Raymond” is displayed up high on the wall at the Black Hills Institute Museum.  The original fossil was discovered in North Dakota, but the Black Hills specimen is a cast of that fossil that now resides at the National Science Museum of Tokyo, Japan.

Like many others in museums worldwide, the Triceratops on display at the AMNH is composed of several specimens.  It is a great dinosaur mount, the skull is impressive and it is a large and imposing creature.  In New York it is located in the Hall of Ornithischian Dinosaurs, where it is posed near fossils of many ceratopsian relatives, including Styracosaurus and Centrosaurus.

“Kelsey” is one of the most complete Triceratops specimens ever found, it was discovered in Wyoming in 1997.  Today “Kelsey” sits at the center of a wonderful Cretaceous display in the Children’s Museum of Indianapolis–the consensus top Children’s Museum in the United States.   In the Dinosphere display, “Kelsey” is caught between two menacing Tyrannosaurus rex.   The special effects in the Dinosphere are terrific: the sky darkens, lightning flashes, the dinosaurs roar!  It is an impressive exhibit with some wonderful dinosaurs.

The Triceratops “Hatcher” at the National Museum of Natural History was the first Triceratops in the world mounted for display back in 1905, and named after John Bell Hatcher who discovered it in Wyoming in 1888.  Like most fossil mounts of this animal it is composed of more than one Triceratops specimen.  “Hatcher” stood guard at the front of the National Fossil Hall for many years, but when the newly renovated Dinosaur Hall opened in 2019, he was “retired” from his guard position and placed in a death pose under a newly mounted Tyrannosaurus.  While it may seem like a sad ending for such an historic dinosaur, the new display is spectacular and will keep Hatcher in the limelight for many years to come.

The Triceratops in Los Angeles is a wonderful fossil.  The skull is fabulous, and the body is posed in a very strong posture, head and tail both up surveying the landscape.   This might be my very favorite Triceratops mount, it’s really a nice looking dinosaur fossil.  In the lobby of the Natural History Museum of L.A. County you can also see a sculpture of another Triceratops, in that case posed in a fierce battle with rival Tyrannosaurus rex.

The Triceratops is one of the first dinosaurs most visitors see at the Science Museum of Minnesota and it is also one of the most spectacular.  For many years this was one of the most complete Triceratops fossils in the world, and very likely the largest on display anywhere.  The skull is a particularly beautiful fossil with an impressive set of horns and frill.

One of the nicest displays about a single Triceratops specimen can be found in Rockford, Illinois at the Burpee Museum of Natural History.  Nicknamed “Homer,” the Triceratops represents a sub-adult specimen that is one of the most complete on display anywhere.   Surrounding the round exhibit are information boards that tell a fascinating story about the fossil.  On the back wall of the room are nine cast skulls from various ceratopsian relatives of Triceratops, giving some context for the animal.  It’s a great display.

When the Houston Museum of Natural Science opened its newly renovated Morian Hall of Paleontology, one of the new stars on display was “Lane”, the most complete Triceratops fossil in the world.  One of the most interesting things about “Lane” is that he was discovered with several large patches of fossilized skin preserved.  This was a first for Triceratops, and in Houston you can see these skin patches right next to “Lane” in the exhibit hall.  Full disclosure: for my birthday a couple years ago, my wife and sons “adopted” this fossil for me, so I have a nice framed certificate which states that I am a proud parent of “Lane” the Triceratops.   Naturally he doesn’t look much like me, but I suspect our personalities have a lot in common.  I’m quite proud!

(1) Museum of the Rockies, Bozeman, MT