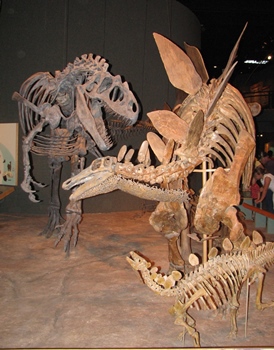 Since the very beginning of the dinosaur rush in the 1870’s in the western United States, Colorado has been one of the best places in North America to find dinosaurs.  Not surprisingly, then, the Denver Museum of Nature and Science is one of the best places to see them displayed. The Prehistoric Journey exhibit at the museum is a wonderful trip through earth’s history as seen in the fossils on display.

As you step inside the Denver Museum of Nature and Science (DMNS), the very first thing you are sure to notice is a huge cast of a Tyrannosaurus rex.  It is standing on one leg, in almost full upward extension.  It is such an unusual position for a T. rex fossil, it’s hard to imagine it in real life now that we know more about how Tyrannosaurus moved.  Even as odd as the posture is, it makes you appreciate just how long a Tyrannosaurus was.  Every time I go there, visitors with cameras make sure their children stand under the lifted foot and imagine getting stomped on.  It is an interesting display, for sure.  I have heard it called the “Dancing T-rex,” which seems an appropriate nickname.

To see the wonderful fossils on display in Denver, you will want to go up to the 2nd floor and begin your “Prehistoric Journey,” the name for the large display area featuring ancient fossils.  Before you enter, you will notice one of my favorite prehistoric displays at DMNS hanging in the lobby–two very large plesiosaur cast (Thalassomedon) skeletons “swimming” in the sky above the first floor, chasing some fossil fish.  The particular specimen that the casts were made from is very large and quite amazing; there just aren’t many full skeletal mounts of a large adult plesiosaur on display anywhere, and in Denver there are two of them!  You can actually see the fossils from all three floors of the museum.

The Prehistoric Journey is organized according to geologic time, and some great displays involve animals that lived before the dinosaur era.  There are some really large and interesting trilobites on display, and the cast of the huge Devonian fish Dunkleosteus is a real beauty.  One of my favorites is definitely the fearsome Dimetrodon, shown attacking an Eryops.  These two creatures lived during the Early Permian and are often depicted as predator and prey.  I really love these fossils.  Not only are they really good looking, the bones have that beautiful red tint that comes from being fossilized in the red rocks of Texas (and Oklahoma), where the majority of these animals have been found.

In the dinosaur exhibit area, visitors will see one of the best displays found in any museum in North America: an Allosaurus attacking an adult Stegosaurus, who is shown protecting two babies.  The Allosaurus is terrific; it is not huge but I love the pose, shown trying to figure out how to best attack this formidable foe.  This fossil was discovered by a 13-year old girl in Moffat County, Colorado.   The Stegosaurus was also discovered in Colorado and is one of the best of its kind on display anywhere, and the two young are the only Stegosaurus juveniles I have seen.  The poses are realistic and very dynamic; it really brings this imaginary Jurassic scene to life.  Sharp observers might notice the protective armor under the neck of the Stegosaurus, something I have not seen displayed anywhere else.

In the Prehistoric Journey exhibit, one thing I enjoy are some really great life-size models. In one scene, two pachycephalosaurs smack heads, depicting a possible mating ritual battle.  In a nearby riverbed lies a Triceratops skull, waiting to be buried and fossilized. Although Stegosaurus is the state fossil of Colorado, the mascot of the local Colorado Rockies baseball team is a purple Triceratops named “Dinger.”  How on earth did that happen? Well, back when they were building the team’s new baseball stadium, Coors Field, construction workers found a number of dinosaur bones, the most interesting being a large skull of a Triceratops.   While the team didn’t end up following the many fan suggestions to name the field “Jurassic Park,” they did end up with a new mascot!

The largest display in the Prehistoric Journey is hard to miss–it’s a huge Diplodocus, a species originally discovered in Cañon City, Colorado in 1877.  On one visit when my youngest son was two years old (his first time at DMNS), he made a beeline right for this impressive dinosaur; in fact, I’d never seen him run so fast.  He wasn’t the only one taken by the giant sauropod; it seems to be a gathering point for many visitors who enjoy gazing at this majestic animal.

There are plenty of interesting fossils at the DMNS, including a pair of Pteranodons: one depicted in flight, the other perched on a rock.  Other favorites include a pair of Coelophysis, several ceratopsian skulls, and a wall filled with prehistoric fish and sea reptiles including a large Xiphactinus, and a terrific fossil of the mosasaur Platecarpus.

Near the end of the fossil exhibit, visitors travel through the Cenezoic Era, the time of mammals.  And if you like prehistoric mammals, then you won’t be disappointed in Denver.  Some wonderful dioramas depict ancient scenes from nearby Wyoming and Nebraska.  Our favorite is the giant pig-like omnivore Daeodon, which was likely an apex predator around 20-25 million years ago.  Huge mammals such as mammoths and brontotheres can be found at DMNS as well, including one of the best Megacerops (formerly Brontops) fossil mounts I have seen.  The great collection of mammals is a perfect way to end your Prehistoric Journey in Denver.

The DMNS is a very large museum with plenty of exhibits besides dinosaurs.   The gems and minerals exhibit is terrific, which I guess is not terribly surprising given Colorado’s history in the mining industry.  Three areas of the museum are particularly great for hands-on exploration: the Space Odyssey is an immersive exhibit that allows visitors opportunities to explore outer space via several interactive stations; the Expedition Health is a fun way to learn about the human body, with particular emphasis on YOUR human body!   The third is for younger children and is called the Discovery Zone, which is a great way for younger children to get a lot of hands-on learning.  And if you just want to get away from the museum scene, the DMNS is located in the western end of the very large City Park, a wonderful space which is a great place for walking, taking a paddleboat out onto the lake, or watching some of the geese and pelicans which can be found during the summer.  The park is very large; it also includes (among other things) the Denver Zoo, a boathouse, and a Dr. Martin Luther King Jr. Memorial.  If the weather is nice, you will not regret making a day out of visiting the museum and the park.

The Denver Museum of Nature and Science is a great museum, with a LOT to do.   It is a huge building with some large areas devoted to interactive science learning.  I consider it a natural science museum mixed with a children’s museum, and it is really good at both.  As far as dinosaurs and prehistoric creatures, the DMNS could probably use a lot more room for displaying their dinosaur collection.  They do such a nice job with the posing of the animals, I only wish they had more room to show off more of their large collection.

My children have been fortunate enough to have visited this museum several times, and we always look forward to going back.  There are an awful lot of fun things for kids to do. As much as they like dinosaurs, both of my sons had even more fun in the Expedition Health exhibit–it’s a fantastic educational experience that is really fun and loaded with experiential learning.  I would be remiss if I didn’t also mention that before we even get inside the museum, both of my boys usually ask me if they can put some money into the sabertooth cat, which greets visitors in the lobby and accepts donations by giving a fun growl.

I think every time we have been to DMNS, we have bought tickets for a traveling exhibit in addition to seeing sections of their permanent collection.  They always seem to have great exhibits!  We have spent over two hours every time we have visited, and as much as four hours.  I would say to plan for at least two hours, that will allow you time to go through the Prehistoric Journey as well as see some of the other impressive areas in the museum.

The Denver Museum of Nature and Science is certainly one of the ten best museums in North America to see prehistoric fossils.  They have some great displays and a broad collection; we love going back every chance we get!

Number of Fossils/Dinosaurs on Display: (8 out of 10)