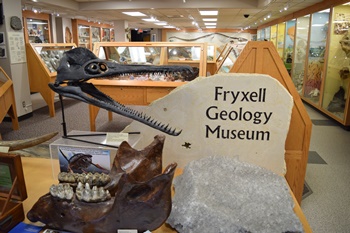 Tucked away in the Swenson Hall of Geosciences on the campus of Augustana College in Rock Island, Illinois is the wonderful Fryxell Geology Museum.  The museum was named for Augustana geology professor Fritiof Fryxell who amassed an impressive collection of fossils and minerals during his career.  Many more have been added over the years, and now the Fryxell Geology Museum is one of the best small fossil museums in North America.  I can’t think of another small private college with such a collection.  Not only does the Fryxell display a number of dinosaur fossils, including those found by an Augustana paleontologist, but they also have pterosaurs, sea reptiles, and a fairly large collection of trilobites and other creatures from well before the dinosaur era.

One of the “coolest” dinosaur fossils displayed in North America can be found at the Fryxell Geology Museum–it was discovered in Antarctica!   The Cryolophosaurus, meaning “frozen crested lizard”, was discovered by a paleontology team led by Augustana College professor William Hammer in 1991.  Partly because of it being found in an unusual location, and partly because it has a unique crest on its head, the Cryolophosaurus has become somewhat of a favorite among dinosaur enthusiasts.  This early-Jurassic theropod lived somewhere around 190 million years ago, and was likely the largest predator during its time.  The fossil cast at Fryxell represents the only specimen recovered, and that was a sub-adult and already over 20 feet long, so it is very likely this dinosaur was very large when full grown.

There are quite a few highlights beyond the Cryolophosaurus at the Fryxell Museum. Several nice aquatic reptile fossils can be found displayed throughout the museum.  As soon as you enter you are sure to see a fantastic cast of a Dolichorhynchops skull.  One of my favorite fossils in the museum is a terrific Platecarpus that hangs on the back wall of the exhibit area.  The fossil itself comes from a farm in Nebraska and the ancient sea reptile was brought to the Fryxell in 1942.  It is a great specimen, and beautifully displayed. Another aquatic reptile fossil on display is a large and interesting skull from a Tylosaurus that was found in Kansas.

For many people visiting the museum, the dinosaur skull casts are certainly highlights. The museum displays casts of several dinosaurs, including popular carnivores such as Tyrannosaurus rex, Allosaurus, and Velociraptor.  There are also a number of casts of fossil skulls of popular herbivores such as Apatosaurus, Ankylosaurus, Pachycephalosaurus, Oviraptor, Lambeosaurus, Protoceratops, and Centrosaurus.

For me, a highlight of the Fryxell Museum is its collection of trilobite, crab, lobster and sea scorpion fossils.  The trilobites are particularly nice, including several beautiful examples of different trilobite species.  There are some eurypterids, or sea scorpions, on display as well: these ancient creatures are not well known to many but are certainly fascinating to visitors.  The museum has some great examples of relatively small eurypterids and a cast of a very large (and a little scary) eurypterid hanging on the wall of the museum.  That fossil made a big impression on my oldest son on his first visit a few years ago.  Fossils of ancient crabs and lobsters are rarely seen in dinosaur display areas, even though we know a lot of dinosaurs patrolled ancient shorelines looking for food.  The Fryxell Museum has several, however, and it is interesting to note how little some of the crustaceans have (seemingly) changed over the 65-million plus years.

In addition to the wonderful fossil collection, the Fryxell Geology Museum also specializes in rocks and minerals, and has an extensive collection.  These are displayed as one might expect according to their properties, and many of them are particularly beautiful and/or unusual.

Fossils and minerals are really the focus of the Fryxell.  If you don’t care much for fossils, the museum does have a very nice collection of rocks and minerals, and a great black light display that shows how different minerals glow under different ranges of UV light. It is well designed for a small museum–you just pull a dark curtain shut and in a small space you can see some how some minerals glow in different light. My boys enjoyed spending time looking at this, as did the other kids in the museum when we visited.  But if you aren’t really in to rocks and fossils, you might instead enjoy a stroll around the nice Augustana campus.

The Fryxell Geology Museum is a small museum, housed in a academic building on campus.  There is not a lot of space for displays, but the museum does a very nice job of packing a lot of interesting exhibits into the space they have.  Other than space, it is hard to recommend any real changes to what they are doing at the museum, it is obviously well run and a deserving source of pride at Augustana College.

My children had a blast at the Fryxell Geology Museum!  When you first get in the building that houses the museum, you can’t miss the Cryolophosaurus, which is one of their favorite dinosaurs.  There is also a femur, tibia and all the foot bones from a large sauropod standing near it–the children in the museum seem to enjoy standing next to this giant leg and contemplating their own relative size.  While the fossils are great, the best part about the Fryxell was the friendliness of the people who work there! The Educational Programs Coordinator (and associate curator) was there when we visited recently and she jumped right in and engaged the kids, having them play games where they would search for particular fossils in the museum, answer questions about what a certain fossil might tell us about the life of the creature, etc.  She was really great with the kids and made our visit very enjoyable. (Thanks Susan!)  The museum keeps a stack of laminated cards of various fossils and minerals from their exhibits that children can use to hunt for the items in the display area.   This is a really good idea, particularly for a small museum…my youngest son had great fun searching.  You can bet we will be doing more of this the next time we visit!

On our trip to the Fryxell Museum we planned to spend no more than an hour, but ended up spending closer to 90 minutes.  The scavenger hunt was a big highlight.  If you have older children, an hour is probably plenty–I’m sure many visitors are in and out in less than 30 minutes.  Still, I would recommend any dinosaur fan to stop by the next time you are driving through the Quad Cities: however long you are here you will enjoy the time spent.

First it must be said that the Fryxell Geology Museum is almost one-of-a-kind.  Generally only large universities with graduate paleontology programs have any kind of prehistoric fossil museum.  Augustana is a small, liberal arts college but seems to have a thriving geology major with a focus on paleontology. If you have a high school student with an interest in paleontology and you want the smaller private school experience, you absolutely should consider Augustana College. (Note: I have no affiliation with Augustana College).  The Fryxell Geology Museum is a very nice little museum that has a wide variety of rocks and fossils, many of which are quite interesting.  And the Fryxell is the best place in North America to see a Cryolophosaurus!

Unique/New/Famous/Important Fossils on Display: (6 out of 10)

Activities/Play Areas for Children: (7 out of 10)