One of the more common displays in prehistoric exhibits is the Xiphactinus, the largest bony fish of the Late Cretaceous period.   Among the reasons that it is a popular display in natural history museums: it is quite large (adults can reach 15-20 feet in length); it looks very ferocious and evidently had a large appetite; and most of all, because there have been quite a few well-preserved fossils unearthed of this magnificent ancient fish.

Many of the best known Xiphactinus fossils come from the Smoky Hill Chalk member of the Niobrara Chalk formation in western Kansas, where numerous fossils have been found in the chalky outcrops that are left from the ancient bottom of the Western Interior Seaway that covered a large area of the great plains during much of the dinosaur era.  The genus was named by eminent early American paleontologist Joseph Leidy in 1870.  Leidy is probably best known for having named the first set of dinosaur remains, a Hadrosaurus, back in 1858, but he made a lot of other discoveries as well.  So the Xiphactinus has been known for a long time and has been a family favorite since the day my oldest son had a well-known naturalist/wildlife photographer visit his school several years ago.  On the occasion, the children were tasked with drawing a picture of an animal whose name started with a certain letter.  My son drew the short straw and got “X,” and he was stumped at first.  Luckily he was able to recall the Xiphactinus we had seen recently at a museum.  He asked the teacher: “Does the animal still have to be alive today?”  “Um…I guess not.”  So the Xiphactinus saved the day for him!

You have many opportunities to visit fossils of this mighty creature, it is displayed in quite a few natural history museums around North America.  Here are my favorites:

This beautiful Xiphactinus fossil hangs in the lobby of the large Museum of Ancient Life in Lehi, Utah.  It is quite high up, unfortunately, so it is hard to get a great look at it.  Still, it’s a nice looking example of this voracious bony fish from the Late Cretaceous period.

The Xiphactinus hanging from the ceiling at the Royal Ontario Museum in Toronto is great.  Its mouth wide open, large teeth ready to grab whatever prey might make the fatal mistake of wandering too close.  It’s not a huge fossil, but it is a very nice example of Xiphactinus.  I only wish it were a little easier to see, it hangs relatively high and is hard to see from some angles. 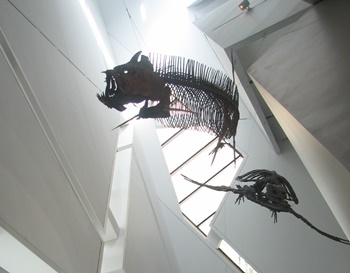 After Kansas, Nebraska is one of the best places to find a Xiphactinus, and the specimen on display at the University of Nebraska State Museum is a great fossil.  While it is not particularly huge for a Xiphactinus, it is an almost complete fossil that is a great example of the genus.

The display at the Science Museum of Minnesota has a lot of good information about Xiphactinus and how the particular fossil in the exhibit comes from Kansas.  It is a rather large specimen, and quite complete.  The skull is not one of the more attractive among Xiphactinus displays, though, otherwise this nice fossil would rank higher for me.

The largest prehistoric fish display at the Carnegie Museum is really great: some of the various fish are shown “swimming” in a glass display case, with the Xiphactinus appearing to chase other fossil fish.  It’s a beautiful Xiphactinus, but like most fossils displayed in glass cases, it is hard to photograph! 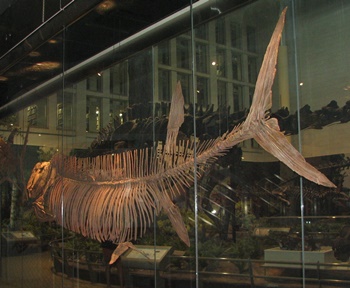 The fossil Xiphactinus at the AMNH in New York is one of my favorites.  While not terribly large, the specimen is great because it has one of the best looking jaws and eyes, which for a Xiphactinus are really the main draw.  This Xiphactinus is hanging from the ceiling with jaw agape, it’s a very clean and attractive display.

The wonderful display of the various inhabitants of the Cretaceous sea in the Field Museum contains a Xiphactinus that is is quite beautiful.  The fossil fish is very long, and while not the largest such specimen, it is displayed in a very attractive way with the body resembling a large slinky.

The large fossil Xiphactinus on display at the Rocky Mountain Dinosaur Resource Center is but one of many large fish and aquatic reptiles from the Mesozoic era that you can see at this museum.  On our first trip to RMDRC several years ago, the “ocean” room had far fewer creatures on display than it did during a recent visit.  Now the room is a must-see for those particularly interested in the aquatic reptiles and fish from the Cretaceous period.  Numerous bony fish fossils are displayed, along with several types of mosasaurs, a number of turtles, and aquatic birds.

I love the Xiphactinus in Denver.  Along with the specimen at the AMNH in New York, this fish has one of the best sets of teeth and jaws, and even better, it still contains the visible remains of its last meal inside.  The Denver fossil is a very large specimen.  It is hard to make out what that last meal was, though, so this Xiphactinus display is not quite as impressive as those in Washington, DC and Hays, KS.  Nevertheless, it’s a real beauty. 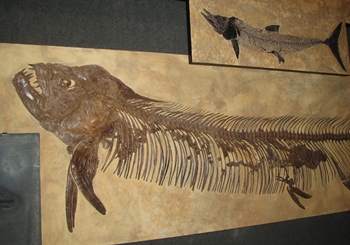 One of the most beautiful recreations of the Cretaceous sea can be found at the Sam Noble Museum in Norman.  The background murals and the lifelike seaweed and plants that surround the fossils give the exhibit a wonderfully immersive feel.  And you get two Xiphactinus fossils in the display!  One is suspended in the air and appears to be “swimming” over the fossil of another that is embedded in the seafloor below.  It’s a terrific display.

While the most famous Xiphactinus fossil resides roughly 230 miles west in Hays, Kansas, the specimen on display in Lawrence is one of the very best.  The majority of the great Xiphactinus fossils on display in museums worldwide come from a few counties in west central Kansas, so it’s no suprise that the top natural history museum in the state might have a terrific fossil.  And they do!  The Xiphactinus in Lawrence is large: not only is it long, but this fossil fish is very wide as well.  It is a great specimen; the skull is in really good shape, the large teeth are visible, and the sheer size of the ancient fish is impressive.

One of the best “fish-within-a-fish” fossils can be found at the Smithsonian National Museum of Natural History.  The Xiphactinus on display swallowed a large fish called Ananogmius, and the entire smaller fish can still be seen inside the Xiphactinus fossil.  It is a great fossil, I hope it is still on display when the huge renovation of the fossil halls is complete in 2019. 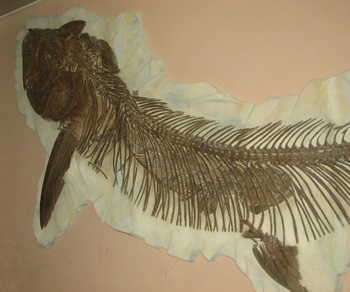 The most famous Xiphactinus fossil resides in the museum closest to where many of the best specimens of this fish have been found.  The Sternberg Museum of Natural History in Hays, Kansas is the home of the “Fish-Within-A-Fish” fossil that George F. Sternberg discovered in 1952.  The 14-foot Xiphactinus apparently swallowed a 6-foot Gillicus whole, and the smaller creature may very well have caused the larger creature’s death when it thrashed around inside after having been swallowed.  Near this awesome exhibit at the Sternberg Museum you can also see a life-size diorama featuring Sternberg uncovering the great fossil.