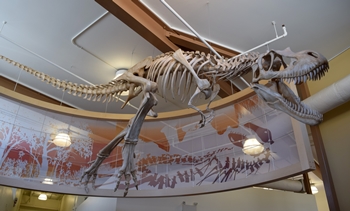 Dinosaur Provincial Park is one of the most remarkable dinosaur discovery sites in the world.  Located in the badlands of Alberta, DPP became a UNESCO World Heritage site in 1979, the only dinosaur discovery site in North America recognized as such.  The reason is quite simple: no other place has seen so many different dinosaur fossils recovered, including those from just about every major dinosaur family.

Dinosaur Provincial Park (DPP) is located in the badlands of Alberta, and situated in the valley of the Red Deer River.  “Badlands” are formed from the ongoing geological properties of erosion and deposition, which create fossil-bearing sedimentary rock.  The thousands of ridges and hoodoos are created from extensive erosion by wind and water over time, leaving the stratified layers of rock that remain. In the case of DPP, the badlands were formed in a flood plain or coastal plain environment approximately 75 to 78 million years ago during the Late Cretaceous.   An ancient river there likely lead directly east to the Western Interior Seaway, whose western coast was a couple hundred kilometers away.

Some of the most famous dinosaurs have been found in the park, most quite rare but some have been found in relatively large numbers.  Herbivores outnumber carnivores in any environment, and that has certainly been true among the remains found in DPP.  The most common dinosaur in the park is probably the Centrosaurus, a ceratopsian that is related to another dinosaur found in the park called Styracosaurus.  At one location in the park, a bonebed of hundreds of Centrosaurus remains was discovered.  Some researchers believe that the animals died in a flood and were deposited together.  At DPP, one of the tours that is available to the public is called the Centrosaurus Quarry hike, where guests can tour the bonebed with a guide and see hundreds of fossils up close.

While a number of ceratopsians have been found in DPP, the other very common animals are from the Hadrosaurid family, or duck-billed dinosaurs.  Numerous fossils of Corythosaurus, Lambeosaurus, Brachylophosaurus, Gryposaurus, and Parasaurolophus have all been found here.  One of the main stops on the Explorer’s Tour brings visitors to a building that houses a beautiful, nearly complete Corythosaurus.  The knowledgeable guide gave a 10 or 15 minute presentation about the dinosaur for our tour group, and then passed some Corythosaurus fossils around for everyone to touch.  My sons particularly enjoyed holding part of the jaw with numerous teeth still embedded.

The bus tour we were on made several stops.  Although it was very hot during our late July visit, it was not humid at all and a nice breeze made the excursion quite comfortable.  That is not typical for that time of year though…remember to bring extra water and wear comfortable close-toed shoes for hiking around the area where the bus stops.  The bus ride through the park can get a little bumpy as there are trails but the bus does not travel on paved roads once you leave the Visitor Centre.

While the ceratopsians and hadrosaurs are the most common finds, among the dinosaurs found in Dinosaur Provincial Park are much more rare finds such as the tyrannosaurs Daspletosaurus and Gorgosaurus, the small raptors Troodon, Saurornitholestes and Dromaeosaurus, and ankylosaurs Edmontonia and Euoplocephalus.  Rare dinosaurs that are less well-known but also have been found in the park include Vagoceratops, Brachylophosaurus, and Erlikosaurus.

In total, the number of dinosaurs and the range of dinosaur families found in DPP is quite remarkable.  The rich diversity of Cretaceous period dinosaurs found here is unlike any other place in the world.  For many years, dozens of world-class specimens have been sent to museums far away such as the Royal Ontario Museum in Toronto, the Canadian Museum of Nature in Ottawa, or the American Museum of Natural History in New York. In fact, many of those museums’ best dinosaur specimens come from DPP.  While museums around the world still get dinosaurs from this wonderful place, now most of the best specimens stay in Alberta and can be seen at the world-class Royal Tyrrell Museum in Drumheller, about 150 km northwest of the park.

One of the great features of Dinosaur Provincial Park is the onsite exhibit in the Visitor Centre.  A museum in its own right, the building houses numerous fossils from the park as well as a small gift shop.  For a small fee you can enter the museum portion of the Visitor Centre.  We thought it was definitely worth the cost.  As soon as you enter the building you see a fantastic dinosaur suspended from the ceiling, an older cousin of Tyrannosaurus rex called Gorgosaurus.

The museum is relatively small but packed with fossils from the park.  There are several complete mounts, including a great scene showing a pack of Dromaeosaurus attacking an adult Corythosaurus.  Nearby is a complete mount of a Chasmosaurus, one of the more common ceratopsians found in the park.  A skull from the ceratopsian Styracosaurus is also on display here.  My youngest son loves everything about ankylosaurs, so he was excited to see a huge tail club from Euoplocephalus.  It was big!  Next to it was a skull from the nodosaur Edmontonia.  There are a number of nice fossil teeth and other recognizable bones, and they come from a wide variety of dinosaurs.  The museum only takes about a half-hour or so to go through, but we found a lot of good information and plenty of interesting fossils.

The drive to Dinosaur Provincial Park (at least from the south and east) is not the most interesting in the world, but once you are close to the badlands the scenery becomes quite beautiful. The Red Deer River cuts through the landscape and there are really interesting geological features.  Many mushroom-shaped hoodoos can be seen throughout the Alberta badlands, they are formed when softer sandstone erodes into a column, yet a harder stone remains on top eventually forming what looks like a mushroom cap.

VISIBILITY OF THE BONES:

The bones at Dinosaur Provincial Park are easy to see if you go to the right places–the Centrosaurus Quarry is the best spot to see many bones in situ.  In several other places in the park you can see dinosaur bones where they were found, now protected by small buildings.   At one stop on our bus tour, we were encouraged to look around and see if we could spot some dinosaur bones, and quite a few of us were able to find one.  If you go to the museum in the Visitor Centre, you are guaranteed to see some dinosaur bones–there are a bunch of them on display.

The Visitor Centre is loaded with great information about the park, including the geological processes that created the badlands, what the area was like during the Late Cretaceous, and of course, the many dinosaurs and other creatures that lived in the area at that time.  There are numerous tours available, the tour we took was very informative, the tour guide was a paleontology student who was knowledgeable and friendly, and really good with all the children on the tour.  There was also a lot of good information in the small buildings with dinosaur fossils, as well.

My children were thrilled to arrive at Dinosaur Provincial Park.  Part of that may be simply because we had driven 18 hours over two days to get there, and they were never more happy to get out of the car and explore.  The bus tour was very enjoyable because we were able to get out at regular intervals and see dinosaur bones.  My youngest son took full advantage of the playground near the campsite, and my oldest son particularly enjoyed the museum at the Visitor Centre.  They also really enjoyed being able to hold several real dinosaur fossils, especially bones that are easy to recognize like teeth, for example.

We spent about three hours in the park.  The bus tour took a little over an hour, then we walked around some on our own.  Finally, we spent 30-45 minutes in the Vistor Centre museum.  There are also specific tours you can sign up ahead for, including one that takes guests out to the Centrosaurus quarry.

If you love dinosaurs and fossils, there is literally no better place on earth to find them–no other place has seen the diversity of fossil finds in one area.  DPP is the reason that paleontologists have a very good understanding of the breadth and depth of life on earth during a roughly 5 million year period in the Late Cretaceous.

Rating Aspects of the Dinosaur Bonebed:

Visibility of the Dinosaur Bones on Display: (9.0 out of 10)