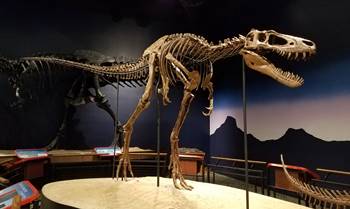 The Burpee Museum of Natural History in Rockford, Illinois is home to quite a few interesting exhibits, but two fascinating and important dinosaur fossils really stand out: the most complete juvenile Tyrannosaurus, “Jane,” and the most complete sub-adult Triceratops, “Homer.”  The exhibits crafted around these two great fossils are world-class and well worth a visit.

We have been to the Burpee Museum a couple of times.  The first was shortly after they opened the “Jane” exhibit; the second was on a beautiful afternoon a few weeks ago.  We were really looking forward to seeing the exhibit on “Homer,” which was not there yet during our previous trip.  We certainly were not disappointed!

Before visitors see the two stars of the show at the Burpee Museum, they are treated to a very nice collection of fossils from various time periods before the dinosaurs, many of them found in the Rockford area or elsewhere in Illinois.  One of the best deposits of fossils from the Carboniferous period (about 300 million years ago) is the Mazon Creek fossil beds in the northeastern part of the state.

One of the attractions at Burpee is a tall display featuring life-size reproductions of animals in a dense Carboniferous forest.  Among the numerous creatures on display, our favorites were the huge ancient dragonfly Meganeura, and the massive 6-8 foot long millipede Arthropleura.  The forest is very well done, and gives an interesting glimpse into the world that existed in Illinois (and elsewhere) long before the dinosaurs.

In 2001, Burpee Museum researchers struck paleontological gold when they unearthed an amazing skeleton of a dinosaur that was clearly in the tyrannosaur family.  While it had obvious features that connected it to other tyrannosaurs, the skull was much smaller than the adult Tyrannosaurus fossils that had been unearthed over the last century.  In fact, the Burpee dinosaur skull looked amazingly similar to an enigmatic skull of another tyrannosaur family member that is housed at the Cleveland Museum of Natural History.  The Cleveland skull was discovered in 1942, and was considered a specimen of the tyrannosaur Gorgosaurus.  After further research in 1988, it was described as a new genus–and considered a contemporary but much smaller relative of Tyrannosaurus rex.  The dinosaur fossil was renamed Nanotyrannus.

After the much more complete Burpee skeleton was discovered, the world’s top Tyrannosaurus experts descended on Rockford to study the new find.  At a conference convened in 2005, a few experts saw the new find as another Nanotyrannus; the clear majority, however, came to another conclusion: that “Jane,” as the Burpee Museum was calling the fossil, was instead a very rare juvenile specimen of the more well-known Tyrannosaurus rex.  This find has called into question the existence of Nanotyrannus as a valid genus, as most paleontologists now believe that both the Cleveland “Nanotyrannus” skull and “Jane” are in fact juvenile Tyrannosaurus.

Juvenile Tyrannosaurus fossils have been extremely rare, and “Jane” is not only rare but is fairly complete.  With so much interest in tyrannosaurs and their growth through the lifespan, the Burpee dinosaur has become one of the most studied dinosaur fossils in the world.  Histological research determined that “Jane” was 11 years old when it perished.  I say “it” because although the fossil was given a female name (named after a Burpee Museum benefactor), the sex of the animal has not been determined.  Growth studies of Tyrannosaurus indicate that the animal would have gone through a huge growth spurt when it reached the age of fourteen or fifteen.

The award-winning “Jane” exhibit is easily one of the best single-dinosaur exhibits in the world.   The skeleton is the star of the room, posed in the center while terrific educational signs and stories about “Jane” surround the dinosaur.  On one wall is a cast of an adult Tyrannosaurus, which in most museums would command plenty of attention.  At the Burpee, however, it is clearly secondary to “Jane.”  The information in the “Jane” exhibit is top-notch, and my sons both enjoyed some hands-on learning through the use of computer kiosks situated around the fossil.  To complete the display scene, a smaller herbivorous dinosaur called Thescelosaurus is turned to face “Jane” while a large Pteranodon flies overhead.

While the “Jane” exhibit is hard to top, the Burpee Museum may have done it recently when they opened a new exhibit in 2013 highlighting another amazing fossil find.  “Homer” the Triceratops was discovered in 2005 among a bonebed containing several different specimens of the animal.  Up to that point, there had not yet been a bonebed of Triceratops–all the fossils that had been found were single individuals.  Many ceratopsian experts assumed that Triceratops was a social animal since many other related ceratopsians have been found in large bonebeds sometimes containing dozens, or even hundreds, of individual animals.  But it was unclear that Triceratops may have shared this behavior until the Burpee team found “Homer” among other Triceratops fossils.

Like the “Jane” exhibit, the “Homer” exhibit is fantastic.  There is plenty of information on large signs all around the skeleton.  The fossil is beautiful and posed in a way that seems very natural, with its head up and body ready to step forward.  While “Homer” (who was named after Homer Simpson) was not a fully grown Triceratops, he was not a baby, either.  One nice addition to the “Homer” exhibit is a growth series of Triceratops skull casts starting with a very small juvenile, leading up to “Homer,” then continuing with even larger specimens of the animal.

To showcase other related ceratopsians, the wall behind “Homer” features skulls from nine different types, from the relatively tiny Zuniceratops to the huge Styracosaurus.  The skulls form an impressive display–if you like frills, this is the place for you!

Both “Jane” and “Homer” are the stars of the rooms they occupy, but there are some other fossils to see at the Burpee.  A full skeletal cast of Pachycephalosaurus can be found in the ceratopsian room, and an impressive cast of a Columbian mammoth stands in a corner near the entrance to the museum.  Of the remaining fossils, perhaps the best collection can be found in the Lower Level of the museum.  Called Fossil Lake: Uncovering a Lost World, the exhibit features dozens of fossil animals from the Green River Formation in southwest Wyoming.

Besides a plethora of fish, the Fossil Lake specimens include animals from the Eocene epoch (dated to about 52 million years ago) such as turtles, birds, and even a small, early horse called Protorohippus.  The display at Burpee is large and there is a lot of interesting information about the collection.  We watched several short videos that described Fossil Lake, and there were several dozen fossils on display in the nearby galleries.  Next to the display is the Paleo Viewing Lab which allows guests to watch fossil preparators work on various specimens.

The two spectacular dinosaurs are certainly the stars at the Burpee Museum, but there are plenty of other interesting exhibits.  We enjoyed the wildlife dioramas; favorites included a polar bear, two lions, a beautiful leopard posed in a tree branch, and a very large crocodile.  There is also a wonderful exhibit on native American life called First People.  My sons enjoyed the full-size tipi and many of the artifacts on display.  The museum is not terribly large, we saw almost all the exhibits and were there for just over two hours.  If the museum is not for you, the building sits on the Rock River below and there was a nice walking path along the river that appeared to be quite popular.

The Burpee Museum has some fantastic exhibits, truly world-class.  But it is not a particularly large museum and many of the dinosaurs on display beyond “Jane” and “Homer” are casts made from fossils at other museums.  It would be tempting to say that the museum could use more dinosaurs, but honestly that is true for every museum!  What the Burpee has done with “Jane” and “Homer” is outstanding; the fairly unique in-depth exhibits about one dinosaur are so well done that I am just hoping that the Burpee researchers find another amazing specimen in the near future–because this museum knows how to make their great dinosaurs really stand out.  Frankly, other museums could learn a lot from the two exhibits.  Dinosaurs that have “names” and detailed back stories are very interesting to the public, and what they have done to highlight them in Rockford is special.

Yes, my sons enjoyed their time at the Burpee quite a lot.  The volunteers that day were very friendly with them and engaged them early on, telling them a little about some of the exhibits and some details they might look for.  The “Jane” and “Homer” exhibits were popular–my boys were split on which one they liked best.  It’s a tough call, to be sure.  I lean towards “Jane” but “Homer” is pretty awesome, too.  There are quite a few activities for kids at the Burpee, check their website for special events before you make the trip.

We spent a little more than an hour on our most recent trip to the Burpee Museum.  I think that was just about the right amount of time.  There is a lot of great information to read, particularly in the “Jane” exhibit, so plan closer to an hour if you want to read all that; otherwise, maybe thirty to forty minutes would be enough to look at all the fossils and prehistoric displays.

For dinosaur fans, there is a lot to love at the Burpee Museum of Natural History.  The “Jane” and “Homer” exhibits are world-class and easily worth the trip to Rockford by themselves.  With its active research program, it is easy to envision the Burpee filled with more great dinosaur fossils in the future.  And I will be first in line!