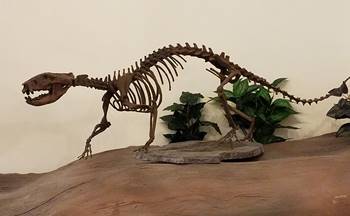 Mammals lived during the Mesozoic Era when dinosaurs ruled the earth, but they were relatively small, never growing much larger than a modern opossum.  Because many early mammals were small and likely nocturnal, for years Mesozoic mammals have been portrayed as tiny and weak,  often depicted hiding under forest growth from the huge, lumbering monsters who ruled during the daylight hours.  While this was certainly true of many mammals, it was not the case for all of them.  Didelphodon was relatively small, but was certainly not a weakling.

Many of the earliest mammals from the Triassic and Jurassic periods were nocturnal insectivores, an ecological niche that quite a few mammals still occupy today, such as bats and aardvarks.  Didelphodon may have been nocturnal, but was more likely crepuscular, which means that it was most active in the twilight hours around dusk and dawn.

Didelphodon, meaning “two-womb-tooth,” was a marsupial mammal that lived at the very end of the Cretaceous period, alongside dinosaurs such as Tyrannosaurus rex and Triceratops.  In fact, it is the only mammal fossil that has been recovered from this time period in North America.  That doesn’t mean that it was the only mammal, of course. Fossils from small animals are very rare, particularly those of mammals and small dinosaurs.  Smaller bones tend to be very delicate and aren’t often preserved in the fossilization process.  Individual bones from mammals have been found, but these are difficult to place in a family without more associated bones.

Until recently, only parts of the jaw and skull of Didelphodon had been discovered.  In the last ten years, however, a fairly complete (30-40%) fossil skeleton has been uncovered in South Dakota, probably well-preserved because it was buried after it died in its burrow. With a body about the size of a large otter, it was obviously very small compared to the huge dinosaur giants of the day.  Nevertheless, Didelphodon was one of the largest mammals from the Mesozoic Era.  The comparatively large skull suggests that this animal was a predator that likely ate a widely varied diet. Didelphodon had large crushing teeth reminiscent of the modern Tasmanian devil, and suggest a diet that probably consisted of hard-shelled animals such as clams or turtles most likely supplemented with a variety of other foods including small marine invertebrates and perhaps even some plants.

The skeleton was found near an ancient riverbed, and this fact, along with the shape of the body, suggests Didelphodon was a semi-aquatic animal.  It was undoubtedly very active, and was certainly a predator with its several types of teeth made for both cutting and crushing.  It had very large premolars and extremely powerful jaws, no doubt making Didelphodon a terror of its Cretaceous river environment.