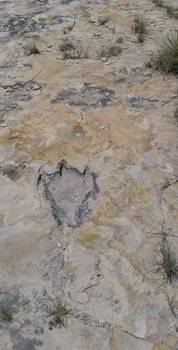 In the northwest corner of New Mexico, not far from where the border meets Colorado, Texas, and Oklahoma, sits a state park full of interesting dinosaur tracks.  While relatively “off the beaten path,” Clayton Lake State Park is one of the more well-known dinosaur tracksites in the west, and one of the few large tracksites open to the public.

The dinosaur tracksite was discovered in the early 1980’s when a flood washed silt away from an earthen spillway above the 1950’s-constructed dam which created nearby Clayton Lake.   As the earth was washed away, a layer of rock dated to about 100 million years old was revealed, and in the rock were hundreds of dinosaur footprints, including several pathways.

When we arrived at this peaceful, quiet state park, we were thrilled to have a chance to get out of the car and walk, and the trail to the dinosaur tracks is a little over 1/4 mile.  The walk takes you past Clayton Lake along a trail full of bustling wildlife.  We saw many different types of birds and insects along the way; my then-six-year-old son enjoyed picking up rocks and seeing if he could throw them all the way down the hill to the lake. (He could, sometimes).  The lake and trail were wonderful; even though it was nearly 100 degrees Fahrenheit outside, the cool breeze off the lake and the tree cover on the trail around the lake made the weather just about perfect.

The day before we arrived at Clayton Lake, we had visited the New Mexico Museum of Natural History in Albuquerque, and there we saw several casts of dinosaur footprints on display. Many of these came from the Clayton Lake tracksite and included a few different types of dinosaurs.

There are several reasons why dinosaur tracksites are so interesting.  For one, it’s just fun to literally walk in the footprints of animals that lived millions of years ago.  And many dinosaur tracks are large–it is easy to appreciate their immense size when you can see the footprints they left behind.  More importantly, though, dinosaur footprints tell us many things about dinosaurs that fossils cannot.  For example, it was from dinosaur tracks that we learned that dinosaurs walked erect and did not drag their tails.  There are enough dinosaur tracksites that show numerous footprints from the same animal that it is quite definitive.  If dinosaurs walked with their tails on the ground, the tracksites would show it. But, they don’t.  That doesn’t mean we don’t have evidence of dinosaur tails hitting the ground–in fact one of the prints at Clayton Lake shows a dinosaur tail touching down behind two rear feet, likely for balance when the animal slipped walking on the muddy shoreline.

At Clayton Lake, the tracks come in many shapes and sizes, and it is possible that some of the smaller tracks were made by juveniles of the same species.  Because some of the tracks are parallel and run in the same direction, the site may very well indicate that some dinosaurs traveled together and may well have been migrating.  Similar tracksites in Colorado (most famously at Dinosaur Ridge in Morrison, CO) several hundred miles north could conceivably be part of the same “dinosaur highway” migration area, although that is difficult (if not impossible) to prove.

While the majority of the 500+ tracks at Clayton Lake come from what appear to be ornithopod dinosaurs, there are some that are very likely carnivorous theropod tracks. The distinctive three-toed, bird-like print with claw marks identifies theropods.

WHO MADE THE TRACKS?

It is unclear which dinosaur(s) made the tracks.  The largest tracks, which are three-toed and likely created by a tall, bipedal herbivore, have been placed in the ichnogenus Caririchnium.  While most common bipedal herbivorous animals during the Cretaceous were from the hadrosaur family, the tracksite at Clayton Lake likely predates all of the known hadrosaurs.  The best guess currently for these tracks is that they were made by an ornithopod in the iguanodontid family, such as Tenontosaurus or other close relative.

The theropod tracks at Clayton Lake are harder to guess, although various tracks represent at least three different dinosaurs.  The largest well-known theropod of this time that could have conceivably lived in the area was Acrocanthosaurus.  It is possible the largest theropod tracks came from this dinosaur, but that is almost entirely speculative.  Most likely they were made by as-yet-unknown small-to-medium sized carnivores.

ARE THERE OTHER ACTIVITIES AVAILABLE AT THE TRACK SITE?

Clayton Lake State Park has quite a few activities available, including fishing, camping and hiking.  There is a lot of room to run, and my son took full advantage the day we visited. The park ranger was very friendly and helpful, and although our stay at Clayton Lake was short, it was fun and memorable.

VISIBILITY OF THE TRACKS:

There are many tracks that are very clearly visible and should be relatively easy to find. Some can be tricky, depending on the sunlight.  We stopped in the middle of a sunny afternoon, and that is not the best time to see them.  Early morning or before dusk are better–when the sun is at its brightest and reflects off the limestone, it can be hard to make out some of the prints.  Fortunately, the signs on the walkway are a big help; they point out the various paths that individual dinosaurs made through the tracksite.

There are plenty of helpful signs at the dinosaur tracksite.  They tell the story of the area and its geologic history, as well as provide lots of information about the dinosaur tracks. Many of the signs can be found in a small gazebo near the tracksite that gives visitors a place to sit out of the sun and read about the site.

Clayton Lake State Park is definitely off the beaten path; the park is located about 12 miles north of Clayton, NM, and when we visited on a warm summer day there were maybe four or five other people in the park, none looking at dinosaur tracks.  The drive from Santa Fe took a few hours, so my youngest son was very eager to get out and run a little when we got to the park.  Thankfully, there is plenty of room to do that, and he ran a lot!  Although it was a very hot summer day, the cool breeze off the lake made it much more pleasant.  We enjoyed the walk around the lake and found the dinosaur tracks to be a nice reward at the end of our little hike.

Assuming you are just going to see the dinosaur tracks, I would plan for an hour, perhaps a little more.  It takes a good 10-15 minutes to walk around the lake to the tracksite, and you’ll want to spend some time there looking at the wide variety of tracks.   Note: there is a $5 entrance fee to the state park.

While the park is certainly off the beaten path for many people, it is a nice little site that is obviously well-maintained and is a great place to see some pretty interesting dinosaur tracks.

Rating Aspects of the Dinosaur Tracksite:

Visibility of the Dinosaur Tracks on Display: (8.5 out of 10)

Activities/Play Areas for Children: (5 out of 10)