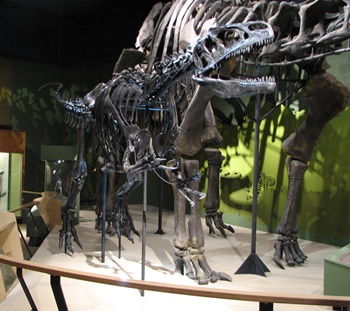 I have always loved the Allosaurus, it is my favorite dinosaur and has been since I was very young.  I’m not sure why…but for some reason I did not immediately take to the T. rex that every other kid seemed to.  I think Allosaurus is a very interesting dinosaur…it lived in the Jurassic Era, roughly 90 million years before the T. rex.  In other words, T. rex lived 25 million years closer to us today then it did to the Allosaurus.  Like T. rex, Allosaurus was an apex predator, but Allosaurus had to find food among some of the largest animals the world had ever seen.  By comparison, T. rex was very large, and probably larger than almost all of its prey.  That doesn’t mean life was easy for the T. rex, of course, but there’s something that I find more intriguing about an Allosaurus, or possibly a group of them hunting together, trying to figure out how to take down a large sauropod like Camarasaurus or Diplodocus, creatures many times their own weight.  So where can I find some great exhibits of this awesome dinosaur?

Fortunately, there are a lot of wonderful Allosaurus exhibits.  Interestingly, the holotype specimen is held at the Yale Peabody Museum and has not been displayed…but that will change when their planned renovations are complete in a few years.

We know that Allosaurus and Stegosaurus lived at the same time in roughly the same area, and their bones today are found in the Morrison formation of the Jurassic.  Research has shown that it is highly likely these two iconic dinosaurs were mortal enemies: Stegosaurus fossils have been found with broken Allosaurus teeth scattered about, which indicates feeding, and Allosaurus bones have been found with injuries that match the tail spikes, or “thagomizer” of a Stegosaurus.  So it is natural to place these two together in a museum display, and the exhibit in Los Angeles does that very beautifully.

There are a number of “juvenile” Allosaurus specimens on display in museums across North America, but the smallest one I have ever seen can be found in Morrill Hall, the campus building which houses the University of Nebraska State Museum.  The little fellow pictured below can be found next to an adult Allosaurus skeleton in the museum’s Jurassic fossil gallery.

The Allosaurus in Houston is a cast of “Big Al Two”, the most complete specimen ever found, and quite large.  The original fossil currently resides in Switzerland.  Big Al Two is a large and beautiful fossil, with a menacing skull and pronounced ridges above the eyes.  It is certainly one of the great Allosaurus specimens.

The Allosaurus at the Carnegie Museum is very nice, posed in a dynamic exhibit in the museum’s Jurassic gallery.  The Allosaurus is shown stalking an adult and baby Apatosaurus.  One of the great things about the Pittsburgh exhibit is that they emphasize showing dinosaurs “In Their Time”, with era-appropriate flora and fauna throughout the displays.

One of my favorite dinosaur displays in the newly renovated Smithsonian fossil hall is the unusual Allosaurus pose.  It is very unusual to display a fearsome predator doing something other than stalking prey, but the new exhibit features the more maternal side of the Allosaurus.  It is shown sitting down, protecting a nest full of eggs.

The Allosaurus in Denver is a real beauty, and the pose is great.  The Allosaurus vs. Stegosaurus poses are very similar in Denver and Los Angeles, but in Denver the Stegosaurus is posed in a more defensive posture, protecting a baby Stegosaurus.  It is a real highlight in the museum’s Prehistoric Journey exhibit hall.  Many fossils from the Jurassic era have been found in the nearby hills in and near Morrison, CO, and the Denver museum has some great specimens.

“Big Al” is the sub-adult fossil Allosaurus that is held at the Museum of the Rockies in Bozeman, MT, but whose cast is on display at the University of Wyoming Geological Museum in Laramie.  “Big Al” is a very important fossil…he is one of the most complete Allosaurus ever found, and one of the most interesting.  This dinosaur led a rough life, suffering numerous injuries, most of which had healed to one degree or another at the time of his death.  On the skeleton you can see some abnormalities, and the museum does a nice job pointing these out for visitors.  “Big Al” was the star of the 2000 BBC Video Allosaurus: A Walking With Dinosaurs Special.

Allosaurus fans should absolutely put Thermopolis, Wyoming on their must-see destinations.  The Wyoming Dinosaur Center Allosaurus display is certainly nice, but what sets the museum apart from its peers is the dig site tours that are available for a small additional admission fee.  The main site for visitors is called the “SI” site, which stands for “something interesting,” which it certainly is.  At the SI site, visitors can see what may be the only place in the world that has distinguishable dinosaur footprints along with the bones of animals that may have made them.  The site contains numerous bones from the Jurassic sauropod Camarasaurus.  Mixed among those bones they have found hundreds of Allosaurus teeth.  Additionally, numerous theropod footprints are also scattered around the site, indicating that about 150 million years ago some predators were munching on the unfortunate sauropods.  Although the footprints from the site cannot be matched with certainty to those two dinosaurs, they are the most likely candidates.

There are two fantastic Allosaurus fossils on display at the AMNH in New York.  The first is right in the lobby, a great exhibit of an Allosaurus attacking a rearing Barosaurus.  It’s a beautiful display, worthy of it’s prime location in this wonderful museum.  There is another great fossil Allosaurus at AMNH and it can be found on the fourth floor.  One of the first dinosaurs ever mounted for display, this Allosaurus is posed feeding on the carcass of a large sauropod.  This mount inspired one of the famous murals by renowned paleoartist Charles R. Knight.

The Natural History Museum of Utah is a wonderful place to see Allosaurus.  It is the state fossil of Utah, and the museum does a great job highlighting this majestic dinosaur.  There are several fossils in the exhibit, both adults and juveniles.  In a very dynamic display, they are shown working together to try to bring down a large sauropod dinosaur.  The museum has a very nice section that highlights central Utah’s Cleveland-Lloyd dinosaur quarry where many Allosaurus specimens have been discovered.

Allosaurus fossils have been discovered in many places in the American west, but nowhere more than at the Cleveland-Lloyd Dinosaur Quarry near Cleveland, Utah.  The Bureau of Land Management in Utah manages the site, and there is a small building that displays a great Allosaurus skeleton and provides a lot of information about the interesting discoveries that have been made there.  Many, if not most, of the Allosaurus fossils on display in museums around the world have come from this quarry–presently over 45 and as many as 60 or so different animals have been identified.  The display is very nice, but the real reason you drive the twelve miles or so off the paved road to see Cleveland-Lloyd is in the quarry itself.  Under one of the covered buildings you can observe a number of fossils from several different dinosaurs that are still in the ground.  If you love Allosaurus, this is the place you want to go!  Recently the site has been designated Jurassic National Monument!