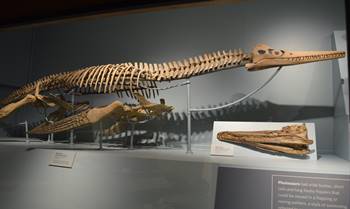 One of the nation’s top university museums, the KU Natural History Museum at the University of Kansas boasts an almost unparalleled collection of Cretaceous period fish, marine reptiles, and pterosaurs.  In fact, several of the fossils on display are among the finest of their kind in the world!

The state of Kansas has long had a distinguished history in paleontology.  Not only have a number of famous paleontologists come from Kansas, but the Niobrara Chalk beds in the western half of the state have provided thousands of important specimens from the ancient Western Interior Seaway of the Cretaceous period.  The Natural History Museum at the University of Kansas is filled with significant specimens from this large ancient waterway, but the museum also displays a few dinosaurs and plenty of interesting fossil mammals.  Located in Dyche Hall, a beautiful building in the heart of the main campus, the KU Natural History Museum was built in 1901 and opened to the public two years later. The building is now on the National Register of Historic Places.

Once inside the main lobby, visitors can see one of the most amazing fossil marine reptiles–a gigantic Tylosaurus hangs above the stairwell.  During its time, this incredible almost-50′-long mosasaur was certainly the apex predator of the sea.  The fossil at KU is a cast of the largest mosasaur ever discovered, and like many major sea reptile discoveries–it was found in Kansas.  I love the way it is creatively displayed, with its long body curling to match the round lobby and its balcony above.

After being amazed by the Tylosaurus, head to the 3rd floor where most of the fossils are on display.  The large room features several hallways, with displays enclosed in glass. Some of the most impressive fossils occupy the most visible areas of the room, which is typically at the end of the hallways.  One of my favorites is a gorgeous Pteranodon, displayed with its wings spread.  Pteranodon was first discovered in Kansas by the famous “bone wars” paleontologist O.C. Marsh back in 1870.  The specimen at KU is quite large. The eye-level display allows visitors to get an up-close look at this amazing animal, and the display has some helpful information.  Another closely related Kansas pterosaur, Nyctosaurus, can be found nearby.

The museum boasts a large number of interesting fossils from denizens of the Western Interior Seaway that covered most of the state during the Cretaceous period.  A large Xiphactinus is displayed prominently, as are a number of mosasaurs and plesiosaurs. A favorite is a fossil of the short-necked plesiosaur Dolichorhynchops, the star of the 2007 IMAX 3-D film Sea Monsters: A Prehistoric Adventure, a film which depicts the Kansas sea during the Cretaceous.  Other sea reptiles on display include the mosasaurs Clidastes and Platecarpus, while among the fish can be found beautiful fossils of Gillicus, Cimolichthys, Ichthyodectes, and the ancient shark Cretoxyrhina.

Despite the state being mostly underwater during much of the dinosaur era, there have been a few dinosaur fossils discovered in Kansas.  One was an nodosaurine dinosaur called a Silvisaurus, found in 1955.  How did a 100% terrestrial animal end up in the ocean chalk deposits in Kansas?  A leading theory posits that it died in or a near a river, and was washed out to sea, perhaps during a flood.  The KU Silvisaurus remains the only fossil of its type yet discovered.

A few dinosaurs not found in Kansas are also prominently displayed in the museum.  A beautiful cast of the small carnivore Bambiraptor is shown in a dynamic pose.  The fossil was discovered by a 14-year-old in Montana in 1993, and paleontologist David Burnham from the KU Natural History Museum prepped the fossil and was later an author in the description of this important find.  This particular Bambiraptor is a juvenile and is one of the most complete raptor fossils yet found.  At the KU museum , the display helps visitors understand how this fossil has contributed to our understanding of how modern birds evolved from dinosaurs that were quite similar to Bambiraptor.

One of the more interesting displays I have seen in a museum lately is the KU exhibit “CSI: Cretaceous Skeleton Investigation.”  Taking up several glass panels, this interesting display focuses on Tyrannosaurus rex, an animal not typically associated with Kansas.  Nevertheless, Kansas has played a big role in its history.  In 1905, a young KU alum named Barnum Brown was credited with discovering the first Tyrannosaurus while working for the American Museum of Natural History in New York.  Brown was one of the more colorful paleontologists during the first golden era (1870-1920) of dinosaur research in North America, and he would go on to find four additional partial skeletons of Tyrannosaurus in his illustrious career.  Interestingly, a bone that was later identified as belonging to a Tyrannosaurus was discovered by Brown during his early days as a student at KU.  That bone is on display in the museum!

Interestingly, Brown developed a friendly rivalry with another Kansas-born paleontologist, Charles H. Sternberg, the patriarch of a famous fossil-hunting family from central Kansas. Sternberg, who attended Kansas State, collected fossils in Alberta during the same time as Brown, and the two made numerous (but separate) discoveries.

Today, the KU Natural History Museum is embarking on an ambitious plan to recover more bones from a partial Tyrannosaurus skeleton first found by a KU team in 2006.  A recent crowdfunding campaign was successful in raising money to fund the continued search for more of the skeleton.  That fieldwork continues this summer, and some of the extra funds they raised will go toward displaying the fossil finds in the KU museum one day.

While Kansas is most famous for its sea creatures from the Cretaceous period, the KU Natural History Museum also displays an impressive collection of fossil mammals.  Full skeletal mounts include a short-legged rhinoceros called Teleoceras as well as the small, ancient horse Mesohippus.  Among the mammal displays I was particularly impressed with two fairly comprehensive exhibits: one focuses on the evolution of beavers and features numerous ancient fossils such as Paleocastor; the other is a terrific collection of saber-tooth cat-like mammals.  Smilodon is particularly well-known, but the KU collection also shows great fossil skulls of earlier saber-tooth mammals such as Hoplophoneus and the cat with the largest saber-tooth of all, Barbourofelis.  These great displays highlight the role of evolution in the history of life, which is a primary focus throughout this wonderful museum.

If fossils aren’t really your thing, there are still plenty of things to see at the museum.  Of particular interest are a few unique and/or historical displays.  One is simply referred to as “The Panorama,” which was first a groundbreaking display put on by Lewis Lindsay Dyche (for whom Dyche Hall is named) for the Kansas Pavilion of the 1893 World’s Columbian Exposition in Chicago.  Displays of animals in museums up until that point had been almost entirely disassociated from their surroundings.  Instead, Dyche created fantastic landscapes and active scenes highlighting numerous animals, depicted in their own environment.  Today, a number of great natural history museums showcase dioramas featuring mounted animals depicted in their natural environment–the first one was this epic creation that is now visible in 360 degree panorama form at the KU Natural History Museum.  Another historical display involving Dyche is the mount of the horse “Comanche,” the only survivor of the U.S. troops from the 1876 Battle of Little Big Horn. The horse was injured in the battle, but was restored to health and immediately retired from duty.  After Comanche’s death, Dyche was commissioned to taxidermy the horse for preservation, and it has remained in the museum’s collection since. There are several other great exhibits, including some with live animals such as insects, spiders, and snakes. Outside the museum, the KU bookstore is right next door, and the campus is always bustling with people enjoying a wide variety of shops and restaurants.

One of the most common problems for museums that were built over a hundred years ago is a lack of display space.  That certainly exists at KU; sometimes the halls feel a little cramped as they show as much of their great collection as possible in a fairly small area.  If the KU team is successful with their Tyrannosaurus search this summer, there is no doubt that displaying the finds will become a high priority–and challenge the museum to find the room to display it!

My children have been to the museum a few times now, and they like the place more each time we go.  The first time they were fairly young, and the KU Jayhawk mascot statue in front of the building was probably the most memorable part of our visit.  As we have returned, they have explored the exhibits longer and found other things to love.  My oldest son likes the sea reptiles and ancient fish; my youngest son prefers the ancient mammals and an exhibit in the museum called “Bugtown,” where our little insect-lover got to run around and play while learning about some of his favorites.

Most of the visitors that we saw were in and out of the prehistoric fossil areas in under an hour.  We spent a little over an hour.  I would say an hour is probably enough for most people to see the fossil exhibits.

The KU Museum of Natural History is a terrific museum, certainly among the top college & university museums in North America.  It is not a huge museum, but there are a lot of fossils to see, many of which are holotypes or other important specimens.  If you like prehistoric fish, sea reptiles, and pterosaurs, the museum is one of the best.