I will admit it…when I went to the McWane Science Center I wasn’t overly optimistic about my chances to see really nice dinosaur displays.  For one, dinosaur discoveries are quite rare in the eastern half of the United States, and especially rare in the south.   Most of the work in American paleontology has been focused on the more easily accessible fossil beds of the western United States and Canada, so it is not often you hear much about the flora and fauna of what was the island continent called Appalachia during the Mesozoic Era. The McWane Science Center focuses on dinosaurs that have been found in the south, and I was very pleasantly surprised during my visit and came away with a much greater appreciation for the museum and the dinosaurs of Appalachia.

Located in the heart of downtown Birmingham, Alabama, the McWane Science Center features many interactive exhibits aimed primarily at younger audiences, although adults will also find plenty to enjoy here.  During my visit, I headed straight for the 2nd level to see the exhibits “Alabama Dinosaurs” and “Sea Monsters.”

During much of the Mesozoic Era, North America was divided into two separate continents by a wide but shallow ancient sea called the Western Interior Seaway. Unfortunately, there aren’t many good places to find dinosaur fossils in what was the eastern half of this ancient sea.  It’s not because dinosaurs didn’t live there, it’s primarily because much of the island continent’s fossil deposits from the Mesozoic were destroyed during the glaciation of the Pleistocene ice age.  Although paleontologists have found dinosaur remains from the continent of Appalachia, they have not been studied nearly as much as those from the western island continent Laramidia.  Few articulated skeletons have been found, but individual bones have been identified that show various hadrosaurs, tyrannosaurs, dromeaosaurs and nodosaurs lived on the continent.

The exhibits at the MSC focus almost exclusively on dinosaurs and other prehistoric life that have been discovered in Alabama.  While the remains aren’t extensive, and some not identifiable at a species level, they do provide an interesting look into the prehistoric creatures that lived on this understudied land mass.

The big highlight of the exhibit is undoubtedly the wonderful Appalachiasaurus display.   One of the most complete tyrannosaur fossils found in the eastern U.S., Appalachiasaurus was a large carnivore that was an apex predator during the Late Cretaceous.  While it’s place in the family tree of tyrannosaurs is still debated, it clearly had many similar features to Albertosaurus and Gorgosaurus, precursors to the later Tyrannosaurus.  The display is very dynamic, showing the creature in a stalking pose, head up and ready to attack, which makes for a great dinosaur display.  Although the original display gave the creature relatively long arms and an un-tyrannosaur-like three fingers, it has been changed since to reflect the more likely scenario that Appalachiasaurus had shorter arms and two fingers on each hand like Tyrannosaurus.  While the Appalachiasaurus is the star dinosaur at MSC, it is not the only skeleton on display.

A number of individual bones have been recovered from various nodosaur specimens from Appalachia.  Nodosaurs are a family of ankylosaurians, and their remains have been found in Alabama. Unfortunately there have not been any full skeletons or even many articulated bones, so the nodosaur specimen that is displayed is naturally quite speculative given that the species has not yet been identified.  Nevertheless, the mount is similar to other nodosaurs such as Gargoyleosaurus and Gastonia on display in other museums.  Posed in the same “forest” environment as the hunting Appalachiasaurus, the creative display is very pleasing to the eye. 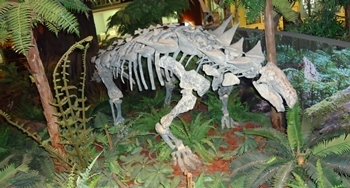 Another exhibit that is very dynamic involves more dinosaurs that have been found in Alabama but are not able to be identified at the species level.  In the display, a large ornithomimid dinosaur (like Ornithomimus or Gallimimus) runs through a forest while two dromaeosaurs attack.  The dromaeosaurs displayed are very similar to Dromaeosaurus in size and appearance.  It’s a fantastic display, one dromaeosaur leaps on to the larger dinosaur from a nearby ridge, another is nipping at the ornithomimid’s heels. The dinosaur displays at MSC aren’t numerous, but they are high quality and really make the “Alabama Dinosaurs” come to life for visitors.

Beyond the “Alabama Dinosaurs” exhibit are “Sea Monsters,” in this case both pterosaurs and sea reptiles that have been found in or near Alabama.   The cast of Pteranodon is shown standing on a nest in front of an ocean backdrop; near it are several full-body skeletons of fish and sea reptiles from the Cretaceous seas that once covered much of the state.  The bony fish Xiphactinus and Pachyrhizodus are particularly large and impressive. The holotype fossil for the Cretaceous toothed bird Halimornus is displayed near a cast skeleton of its relative Ichthyornis.

A fossil that is not often seen in museums is the ancient shark Cretoxyrhina, and the specimen at McWane is great–a largely complete fossil of what was a very long and undoubtedly scary predator.  The MSC specimen was about 25 feet long, which is a good five feet longer than the largest Great White sharks today.  Other denizens of the ancient sea at MSC include sea reptile fossil bones from several species including Tylosaurus, Clidastes, and Platecarpus.

The Sea Monsters exhibit also has a couple of different ancient turtles on display, and some bones associated with dinosaur-era crocodiles that come from Alabama.  Like the “Alabama Dinosaurs,” the “Sea Monster” exhibit is very high quality.  These exhibits aren’t particularly large, but they are well-designed and offer plenty of helpful educational signs along the way.

If you don’t like dinosaurs, you’re still in luck at McWane Science Center.  The entire lower level is dedicated to a large aquarium with river and ocean environments, and a shark and ray touch tank that is very popular.  Upstairs, there are a lot of cool science exhibits on the museum’s first and second floors.  The first floor is devoted to numerous hands-on scientific experiments that are designed for children.  On the second level is a Tesla coil which is used in a theater devoted to science demonstrations, a really cool 6-foot globe that displays interesting and educational planetary data on a number of subjects, and a “high cycle” high-wire bicycle ride that looks like a lot of fun.  On the third floor guests can attend one of several IMAX movies.  McWane Science Center has a few great dinosaurs and prehistoric fossils, but that is just a small part of this interesting museum.

I really like the dinosaur and “sea monster” section of this museum.  With that said, I think the most obvious thing that would make it better would be simply to have more prehistoric fossils from the Appalachian continent on display.  Of course that is not so easy to do, especially when few dinosaurs have been discovered in this part of the country and the vast majority of paleontological work in the United States is being done in the west. As more paleontology discoveries are made, the MSC has a chance to become one of the leading dinosaur museums that focus on ancient Appalachian flora and fauna.

My children did not get to go to the MSC with me during my visit.  I have no doubt they would have enjoyed it, the museum has many exhibits that appeal to kids.  If I had any children 5 or under, I would absolutely take them to MSC to experience their “Itty Bitty Magic City” exhibit, it looks like a lot of fun and is designed for the youngest visitors.  The MSC is primarily designed for children and does a great job creating appealing exhibits.

Unique/New/Famous/Important Fossils on Display: (5 out of 10)

While the McWane Science Center doesn’t have a lot of dinosaurs or prehistoric creatures on display, it does have some great exhibits that feature ancient creatures that inhabited Alabama during the dinosaur era.  I think in two hours you can easily cover the entire “Alabama Dinosaurs” and “Sea Monsters” exhibits, and you will still have some time left over to explore other areas of this fun and educational museum.