Some of the best preserved dinosaur tracks in North America can be found along a several-hundred mile stretch of the Connecticut River Valley.  The best place to see them in situ is Dinosaur State Park in Rocky Hill, CT, located about fifteen miles south of Hartford. Discovered by a construction worker in 1966, the slabs of gray sandstone that preserved the Early Jurassic-era tracks are now part of a wonderful exhibit that features over 500 dinosaur footprints. 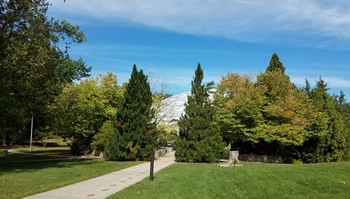 As the tracks were discovered, the historical significance of the 190-million-year-old tracks was obvious and within three weeks the state decided to preserve the land within its state park system.  A temporary protective dome was built in 1969 to safeguard a large section of the tracks, but this collapsed several times over the next 8 years, and finally in 1977 a geodesic dome was built as an Exhibit Center to house the tracks and much more.  While the hundreds of footprints can be seen inside, the building also features significant displays and educational information about the history of the track site and the Connecticut River Valley.  There are classrooms and a small gift shop, as well.

Ichnology is the study of the trace remnants of animal behavior, such as footprints. Paleoichnologists study ancient fossilized footprints, markings, burrows, or any other trace fossils that might help indicate how ancient animals lived.  Dinosaur tracks are one of the main areas of ichnology research, and the tracks made by ancient creatures have their own names that are not associated with particular dinosaurs. Sometimes you will see overenthusiastic dinosaur fans say “this track was made by a Tyrannosaurus” or some such thing, but the reality is that without the accompanying animal, it is impossible to verify that one set of tracks comes from a particular dinosaur. On the other hand, paleontologists can make good approximate matches of well-preserved footprints with the foot bones of dinosaurs and be able to tell that a particular footprint was likely made by a particular dinosaur or some close relative.

One of America’s earliest geologists with a love for paleontology, Edward Hitchcock was a professor of geology and president of Amherst College in Amherst, MA.  He found out about the 1802 discovery of some “fossilized bird tracks” in Massachusetts and was interested to see what some were calling footprints from “Noah’s Raven.”  Hitchcock saw the tracks and published an 1836 paper describing the tracks as ancient giant bird footprints.  He ended up devoting much of his life to the study of fossil tracks, amassing a vast collection from the region.  As the foremost expert on dinosaur tracks, he named many of the various tracks, assigning an “ichnogenus” to the different types of tracks that had been unearthed.  It is interesting that 180 years after Hitchcock’s paper, there is now little doubt that the origin of modern birds started from dinosaur ancestors in the Jurassic period–and Hitchcock’s theory about giant ancient birds looks pretty accurate today!

The majority of tracks in the Exhibit Center at Dinosaur State Park represent the ichnogenus Eubrontes, which was made by a relatively large bidpedal dinosaur.  These tracks are very common throughout the valley, and in 1991 Eubrontes was designated the state fossil of Connecticut.

The tracks at Dinosaur State Park are easy to see and the park has made some very nice additions to enhance the experience of viewing them.  I have seen a lot of dinosaur tracks all over North America, and typically seeing dinosaur tracks is not a very immersive experience: without the amazing dinosaur skeletons giving perspective to the tracks, sometimes their grandeur is lost a little.

That is not true at Dinosaur State Park, however, where they have done an amazing job making the site much more immersive than any dinosaur track site I have seen.  Through the use of lighting and a great sound system, visitors are treated to wildlife sounds and occasional dinosaur grunts and growls.  The lights dim, then darken, and come back to life again, all changing the look of the dinosaur footprints underneath.  It is quite impressive.

One of my favorite features of the track site is the ability to highlight some tracks that show a path that one dinosaur followed through the site.  By pushing a button, a track is highlighted and then the next step lights up, then the next, and so on.  It’s an impressive addition that makes it fun to play with and fun to see where the tracks lead. 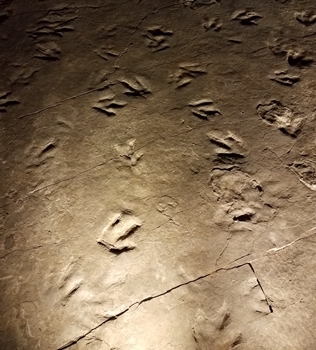 Who made the tracks?

At Dinosaur State Park, there are footprints from quite a few different dinosaurs, and while it is impossible to know exactly which dinosaurs made them, there are some likely candidates.

The largest footprints, Eubrontes, represent a large bipedal dinosaur that was likely a meat-eating theropod dinosaur, although it is possible that they were made by a herbivorous dinosaur called a prosauropod, an ancient mostly bipedal relative of the giant quadrupedal sauropod dinosaurs such as Apatosaurus or Diplodocus that would thunder across the landscape millions of years later in the Late Jurassic.  The best candidate currently for the Eubrontes tracks is Dilophosaurus, a dinosaur that lived in the Early Jurassic when the tracks were made and was quite large for a theropod dinosaur at the time, with adults reaching sizes over 20 ft. long.  It is important to note that no Dilophosaurus fossil bones have been found anywhere in the Connecticut River Valley, so the Eubrontes tracks could come from a dinosaur that is not Dilophosaurus.  Still, it is the best guess that these tracks were made by this dinosaur or a fairly close relative.  Near the tracks in the Exhibit Center, a life-size display features a Dilophosaurus stalking through the forest as the early pterosaur Dimorphodon flies overhead.

Another track that is fairly common at Dinosaur State Park is called Grallator, a three-toed print made by a smaller bipedal dinosaur.  The dinosaur that is most commonly associated with Grallator is the Late Triassic theropod Coelophysis.  Like Dilophosaurus, the remains of Coelophysis that have been found come from the American southwest, particularly New Mexico and Arizona.  So while it is possible that the Connecticut River Valley tracks of Grallator come from Coelophysis, it is more likely that they came from a “Coelophysis-like” dinosaur.  Whoever made the tracks, it is likely that the dinosaur had more than three toes but that one or two of the outer toes probably did not reach the ground and therefore did not leave a print.

Other tracks at the site come from a small, probably herbivorous ornithischian dinosaur. These tracks have been given the name Anomoepus.   One of the more rare and interesting tracks found here is called Otozoum, which most likely belonged to a fairly large bipedal dinosaur called a prosauropod.  The prosauropods are a very interesting group of dinosaurs, with only a couple well-known species.  They were bipedal, but unlike most bipedal dinosaurs they were herbivorous.  Plateosaurus is the best known of the group, and it has been found at various sites in Europe.  Another prosauropod named Unaysaurus has been discovered in South America, but no prosauropods have been found in North America. One suspect for the Otozoum tracks is a dinosaur named Anchisaurus that was found in Connecticut and once thought to be a prosauropod, but now is considered a closer relative to sauropods than prosauropods.  Could it have made the tracks?  Perhaps.  The best we can probably say at this point is that the Otozoum tracks illustrate just how difficult it is to pair a dinosaur track with a known dinosaur.

While the 500 or so tracks that are visible inside the Exhibit Center are terrific and have been widely studied, the construction workers who found the site originally found many more, perhaps 2000 tracks in total.  The state decided to protect those other 1500 or so tracks by reburying them, as exposure to the elements can erode tracks relatively quickly.   Dinosaur State Park has grown fairly dramatically over the past fifty years, and there are plans to one day build a new building to display the remaining dinosaur tracks.

Are there other activities available at the track site?

While the Exhibit Center is certainly the highlight of Dinosaur State Park, there are other activities available.  Several miles of hiking trails through rolling hills can be found in the park and offer visitors an opportunity to explore the flora and fauna of Connecticut. Among the natural beauty, it is possible to find pieces of basaltic rock from ancient lava flows that dotted the landscape during the time of the dinosaurs.  In the summer the park has activities for families such as making a plaster cast of a dinosaur track (read their website before you go–you will need to bring some supplies), or the opportunity to sort through a pre-purchased bag of material to search for small fossils and minerals.

Visibility of the tracks:

If you go to Dinosaur State Park, you will absolutely see a lot of dinosaur tracks.  They are not only visible, but the park has done a wonderful job helping visitors identify the tracks and even follow certain pathways that individual dinosaurs took through the site many millions of years ago.

Dinosaur State Park has some of the best signage I have seen at a dinosaur park or museum.  In the Exhibit Center you can easily spend an hour or more just reading all the signs before you even get to the tracks.  Not only are there wonderful educational signs, but there are also fun interaction stations where you can learn about dinosaur tracks and behavior.  The signs/educational information in the Exhibit Center are really quite creative as well.  The sign discussing the bulldozer driver finding the site is displayed on a large cutout of a bulldozer.  There are interesting exhibits depicting geological concepts as well, including a nice feature on how sedimentary rocks end up in stratified layers.  Overall, an excellent job by Dinosaur State Park.

Did my children enjoy going?

Alas, my children did not get to go to Dinosaur State Park with me.  I was able to visit on a weekday morning during the school year, so it was not crowded with children as it typically would be in the summer on a weekend.  The exhibits will thrill most children–the tracks are easily visible, there is a lot of information aimed at children available in the Exhibit Center, and the sounds and lighting displays are not scary at all but are fun and would heighten the experience for just about anyone.

Visibility of the Dinosaur Tracks on Display: (10 out of 10)

Activities/Play Areas for Children: (9 out of 10)

25-30: Very Good, worth spending some time to see dinosaur tracks.

20-25: Good, but will require some effort to see the tracks and/or interpret them.

Below 20: The dinosaur tracks are hard to find and/or see, and there is not much help in the area to guide you.