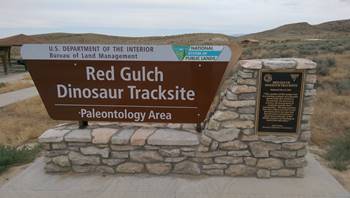 Wyoming is home to many famous dinosaur discovery sites, including the legendary fossil-bearing ridge from the Jurassic period known as Como Bluff.  Several hundred miles to the northwest in this beautiful state lies a fairly recently discovered dinosaur tracksite, where paleontologists have identified hundreds of footprints that date to the Middle Jurassic around 170 million years ago.  The Red Gulch Dinosaur Tracksite is the largest in Wyoming and has been instrumental in helping us better understand this region during the dinosaur era.

I love Wyoming, I think it is one of the most beautiful states in the union, and it never ceases to amaze me.  From the incredible wilderness of Yellowstone to the mountain vistas of the Grand Tetons, gorgeous rock formations throughout the Big Horn Basin, Wyoming has an overwhelming abundance of natural beauty.  It also has a great history in paleontology, and we have learned a lot about dinosaurs from the various specimens that have been found in the state.  A relatively new discovery, The Red Gulch Dinosaur Tracksite (RGDT) was discovered on public land and first reported in 1997.  The Bureau of Land Management operates the site and first dedicated it in 2002.

We have learned an awful lot about the roughly 165 million years that dinosaurs inhabited the earth, but we know a lot more about some periods in that stretch of time than others. The very end of the Cretaceous period (approx. 65-66 mya), for example, is a time that has been extensively studied and–importantly–has large areas of fossil-bearing rocks available for paleontologists to explore.   The Late Jurassic period (approx. 150 mya) is another well-studied time, with large swaths of the American West giving us fossils from that period.

What is perhaps most intriguing about the RGDT, however, is that it comes from a geologic formation called the Sundance that in the Middle Jurassic in Wyoming (approx. 167 mya) has been considered to be primarily marine in nature.  In other words, according to what we thought about the area and time period, this dinosaur tracksite shouldn’t have been there!  The Red Gulch tracksite is evidence, then, that the Sundance Sea (named for the formation) that spread across much of the western North American continent during this time period advanced and receded numerous times.

During a time when the sea had receded, dinosaurs walked along the coast and made the tracks at Red Gulch.  Indeed, the rock layers just above and below the RGDT have been identified as marine, supporting the advancing/receding sea hypothesis.

There are over 1,000 documented tracks and 125 individual dinosaur pathways at RGDT. Some of them are pretty easy to spot, others not so much.  The majority are located in the “ballroom,” the large open area just past the walkway.  One of the challenges is that the tracksite also features ripples from the ancient coastal environment, and separating the ripples from the tracks can be difficult.  All of the footprints we found look to be about four to eight inches long, made by a three-toed dinosaur that was bipedal.  This dinosaur was most likely a meat-eating theropod as their tracks are often three-toed and almost symmetrical, as are the tracks at RGDT.  On some tracks, faint claw marks are visible.

Who made the tracks?

It is unclear which dinosaur(s) made the tracks.  There are very few dinosaur fossils from North America from the Middle Jurassic time period.  Most of the dinosaurs identified from this period have been found in China and in Europe.  The best conclusion so far is that the tracks were made by small-to-medium sized bipedal carnivorous theropod dinosaurs, probably weighing between 50 and 400 lbs.  It is likely that the tracks were made by several different types of dinosaurs.

Are there other activities available at the track site?

After you get off the highway, visitors must drive a few miles on a dirt road before arriving at Red Gulch Dinosaur Tracksite.  From there the site consists of a small parking lot, a covered picnic area, a portable restroom, and the walkway leading to the dinosaur tracks. We were reading reviews of the site online the day before we arrived, and one visitor from a week prior to our visit mentioned that they saw two rattlesnakes during their visit.  My younger son was thrilled about the possibility of seeing a rattlesnake, but the rest of us were quite happy to NOT see any rattlesnakes.  We did see a pronghorn during our drive on the dirt road, though, and that was perfectly fine for us.  Other than viewing wildlife and the beauty of the natural environment, there isn’t really anything to do at the tracksite but admire the tracks.

Visibility of the tracks:

There are a few of the tracks that are very clearly visible and should be relatively easy to find.  Many can be tricky, depending on the sunlight.  We stopped in the middle of a sunny afternoon, and that is not the best time to see them.  Early morning or before dusk are better–when the sun is at its brightest and reflects off the limestone, it can be hard to make out some of the prints.  Fortunately, the signs on the walkway are a big help; they point out the various paths that individual dinosaurs made through the tracksite.

The nine information signs on the walkway at RGDT are very helpful.  Not only do they help explain the history and discovery of the site, they also help visitors know what to look for when they get down to the “ballroom” to find the tracks.

Did my children enjoy going?

If I were to rank my sons’ enjoyment of the various parts of our trip to the RGDT, I would say first was the (thankfully) fruitless search for rattlesnakes, second was the off-road drive to the tracksite, third was looking for dinosaur tracks.  Paleontologists and people who are used to looking at dinosaur footprints will have no problem finding tracks here, but for my children, it was difficult to be sure when they found them.  Fortunately, several are very clear, and they felt a sense of accomplishment in finding them.  It was a fun adventure; we stopped at RGDT for about an hour and saw what we were hoping to see.

Rating Aspects of the Dinosaur Tracksite:

Visibility of the Dinosaur Tracks on Display: (7 out of 10)

Activities/Play Areas for Children: (5 out of 10)

25-30: Very Good, worth spending some time to see dinosaur tracks.

20-25: Good, but will require some effort to see the tracks and/or interpret them.

Below 20: The dinosaur tracks are hard to find and/or see, and there is not much help in the area to guide you.