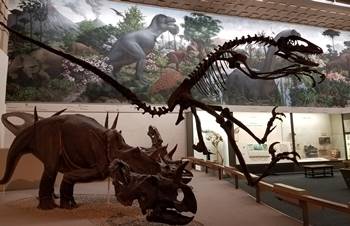 Before the late author Michael Crichton sat down to write Jurassic Park, he read a news story about a dinosaur discovered in Montana by Yale University’s John Ostrom.  Ostrom was a prominent paleontologist who went against convention in strongly advocating the idea that dinosaurs were active, bird-like, and probably warm-blooded, and he had finally found a fossil to help him prove it.

The dinosaur Ostrom found he called Deinonychus, Greek for “terrible claw.”  It was relatively small for a dinosaur, but very large for the family of dinosaurs to which it was most closely related.  Deinonychus was a close relative of the smaller dinosaur Velociraptor, and like Velociraptor, it had a large and dangerous sickle-shaped claw on the second toe of each foot, and three strong claws on each hand.  Along with these, a mouthful of serrated teeth designed for slicing made Deinonychus a very successful predator in its world around 110 million years ago.

While bones from this dinosaur were discovered as early as 1931, Deinonychus was not formally named until Ostrom published his groundbreaking work in 1969.  Describing a fast, agile, bird-like predator, Ostrom made the case that Deinonychus was likely warm-blooded, much like modern birds.  His theory was controversial at first, even though paleontologists had remarked on the similarities between dinosaurs and birds since the 19th century.  Still, for half a century scientists and the public had viewed dinosaurs as slow and dim evolutionary failures.  Ostrom sought to change that perception, and his Deinonychus study is often seen as the beginning of what is now called the “dinosaur renaissance.”

Deinonychus is often associated with the herbivore Tenontosaurus, as several fossil sites have found Deinonychus teeth scattered among Tenontosaurus remains, and fossils of both animals have been found near each other.  Carnivorous dinosaurs often shed teeth during feeding; later these teeth would be replaced.  If Deinonychus actively hunted this prey, it is likely that it hunted in packs, as an adult Tenontosaurus is a much larger and heavier animal and would have been very difficult for one Deinonychus to bring down.

After reading Ostrom’s theories about dinosaurs based on Deinonychus, Crichton met with Ostrom and listened to him explain more about this amazing predator and how they might have hunted cooperatively.  After their meeting, Crichton decided to make this raptor one of the central characters in his new novel.  He ended up calling the dinosaur in Jurassic Park Velociraptor instead of Deinonychus, but based on his descriptions of the size and behavior of the animals, it was clear he was really writing about Deinonychus. When the film finally came out in 1993, the small carnivore from Mongolia known as Velociraptor immediately became a household name and is now one of the most beloved dinosaurs world-wide.  Velociraptor is certainly a great dinosaur in its own right, but most of the glory from Jurassic Park should have gone to the amazing Deinonychus!