In typical circumstances, excavating a fossil dinosaur is extremely difficult.  In 1991, paleontologist Dr. William Hammer and his team from Augustana College excavated a large theropod dinosaur from one of the most difficult locations any dinosaur has ever been found–Antarctica, about 400 miles from the South Pole and about 13,000 ft. above sea level.

Geologist David Elliot actually discovered the dinosaur bones and notified Hammer, whose team worked to free the rocks containing the fossils.  Most paleontologists work in the summer, often in regions where summers can be excessively hot; for this dig, however, the Augustana team worked the entire time at high altitude in temperatures consistently below -25 degrees Fahrenheit!  Despite the immense difficulties of working in such an environment, the excavation was a success.  Once the bones were back in the lab in Illinois (along with the other 5,000 lbs of rock they brought back encasing the bones), Hammer realized they had found something truly remarkable.

A large carnivorous theropod dinosaur was encased in the block, the first (non-avian) dinosaur discovered in Antarctica.  While it probably wasn’t yet fully grown when it died, the dinosaur they named Cryolophosaurus (“Frozen crested lizard”) was over 20 ft. long, with a mouthful of sharp teeth.  Distantly related to the North American Allosaurus, Cryolophosaurus lived about 40 million years before Allosaurus, in the Early Jurassic period around 190 million years ago. 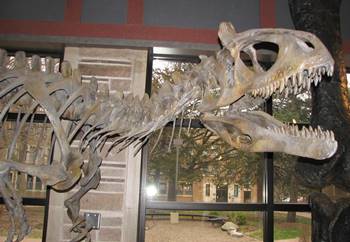 This discovery shows that when the two ancient supercontinents Gondwana and Laurasia joined together to form the giant supercontinent called Pangea around 335 million years ago, animals were free to roam both the northern and southern sections of the supercontinent.  When they began to break apart again during the Late Triassic and Early Jurassic period some 125 million years later, some animals became isolated on island continents like Antarctica and then evolved separately over many millions of years.  But cladistics, or analysis of their features, show that despite living on different continents, many animals share ancestors that once lived on the supercontinent.

One of the most interesting features of Cryolophosaurus is the unusual crest on its skull. Unlike most crested dinosaurs, the crest is horizontal to the front of the skull and gives it quite an interesting appearance, as well as the nickname “Elvisaurus,” for the resemblance of the crest to Elvis Presley’s pompadour hairstyle during the late 1950’s.

Although Cryolophosaurus wasn’t described and named until 1994, it has become a fairly popular dinosaur.  The strange crest and nickname undoubtedly helped it earn a recurring role in the popular children’s television series Dinosaur Train, where the dinosaur character is nicknamed “King Cryolophosaurus,” who just happens to talk and sing like Elvis. 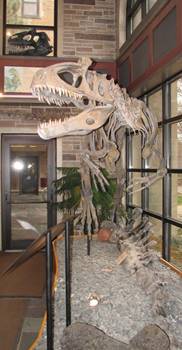 A frequently asked question about Cryolophosaurus is “how could it survive in such a cold climate?”  The answer is quite simple: back in the Early Jurassic, Antarctica was located much closer to the equator than it is today, and thus the climate was much milder.  So, despite the climatic conditions of its final resting place in modern times, a temperate climate and lush green forests were the home for this apex predator, which likely dined on early sauropod dinosaurs such as Glacialisaurus, a dinosaur named in 2007 from the same rock formation in Antarctica that held Cryolophosaurus.

While the fossils of the holotype dinosaur are held at the Field Museum of Natural History in Chicago, one of the best places to see a mount of Cryolophosaurus is at the Fryxell Geology Museum on the campus of Augustana College in Rock Island, Illinois.

Husband, father of two boys. Has traveled extensively while working for the last 15 years as a healthcare consultant. University of Michigan/Ann Arbor (B.A.) and Indiana University/Bloomington (M.A.) alum. Love dinosaurs and other prehistoric life, love to visit natural history museums.
View all posts by johngnida →
This entry was posted in dinosaur museums, dinosaurs, Fossil of the Week, Natural History Museums and tagged Cryolophosaurus, dinosaurs, Fossil of the Week, Fryxell Geology Museum, Natural History Museums, The Field Museum. Bookmark the permalink.