I first visited the Natural History Museum of Utah when the facility was located in the heart of the University of Utah campus.  It certainly had character and a lot to offer, but it did not have nearly the abundance of space, particularly not enough to keep up with the ever-expanding fossil collection that NHMU has seen since a treasure trove of new species were discovered in Utah’s Grand Staircase-Escalante National Monument in the past decade or so.

My son and I came about a week after the paper describing Kosmoceratops hit the national news, and we were very excited to see the skull of the “new” dinosaur in the lab undergoing cleaning and prep.  The dinosaur section was great, I remember seeing Falcarius for the first time there.  The Allosaurus fossil “attacking” the Camarasaurus fossil was a great display as well.  They also had a nice collection of ceratopsian skulls.

Three years later, we returned after the new building “The Rio Tinto Center” on the edge of campus opened a few miles from the original site–and what a great surprise!  The building itself is very beautiful and was built with materials that reflect Utah–sandstone, red rock, copper, etc.  But more impressive was the space now available to display some of their outstanding fossil collection. 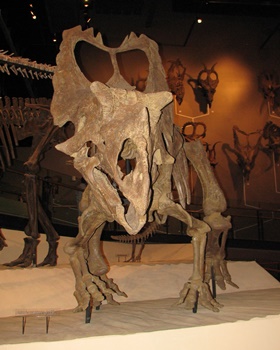 There are a LOT of highlights for the dinosaur lover at NHMU.  One is certainly the impressive wall of ceratopsian skulls, it is a great display that helps visitors understand the relationships between some of the many species of these creatures.

Allosaurus is my favorite dinosaur, and NHMU is just about heaven for an Allosaurus lover.  Gone is the old display of the fossil attacking a Camarasaurus, it has been replaced by a very dynamic scene of several allosaurs working together to attack a large sauropod.  Adults and juveniles are displayed in a variety of poses, one even perched on the back of the sauropod (which seems awfully dangerous…to the Allosaurus).   There is also a nice section devoted to the Cleveland-Lloyd Dinosaur site in Utah, the place where a large majority of Allosaurus skeletons on display around the world come from.  I particularly enjoyed the display about the ongoing mystery of how so many fossils came to rest in the same bone bed. 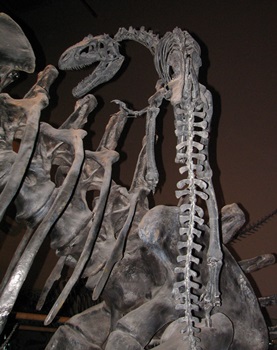 There are many other highlights at NHMU.  So many recent dinosaur discoveries are on display here, it is a treasure trove for the dinosaur lover who has only read about these discoveries.  Included are relatively recent discoveries like Nasutoceratops, Utahceratops, Kosmoceratops, Lythronax and a pair of tyrannosaurids called Teratophoneus.   Several dinosaurs on display are relatively rare in museum displays, including Gryposaurus and Falcarius.  They do a really good job of displaying these interesting, less common dinosaurs that many people have not seen in other museums.

You don’t like dinosaurs?  What???  They love you!  (You taste like chicken).  But yes, NHMU has plenty of great displays on other subjects, with a particular focus on the interesting natural history of the state of Utah.  The exhibits we saw were very nice, I particularly enjoyed the exhibit on the history of the land formation in Utah.  Still, the dinosaurs are the real stars here.  NHMU also has a very nice selection of fossil mammals from after the dinosaurs.  One of the most interesting of these is the Uintatherium, a very large and interesting looking herbivore from the nearby Uinta Mountains that lived about 40 million years ago.

The great dig pit/fossil wall from the old museum appears to have become a casualty of the move, and that was a lot of fun for my son several years ago.  Also, the lighting in some of the new dinosaur displays is only OK, not great.  This makes for difficult photography, but also just seems kind of dark…the Allosaurus corner seemed especially dark.  And I will admit that I was a little disappointed that one of my favorite new dinosaurs from the last ten years, Kosmoceratops, had a skull displayed on the ceratopsian wall, but not a complete skeleton on display.  (And I fully acknowledge the fact that ceratopsian bodies are very similar to each other, so the fun is in the skull anyway…but still Kosmoceratops is probably the most interesting newly discovered ceratopsian.).  But these are such minor quibbles–if you like dinosaurs the NHMU is well worth your time.

Absolutely.  If your kids like dinosaurs, this is a very special place and has some jaw-dropping displays.  One of my sons loved the Deinosuchus display, it is a very impressive ancient crocodilian.  There are a lot of programs for kids at the museum, be sure to check their website for event times before you arrive.

Unique/New/Famous/Important Fossils on Display: (9.5 out of 10)