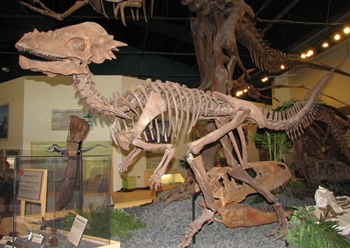 One of the more unusual dinosaur families are the pachycephalosaurs.  The most well-known of them lived in the Late Cretaceous period and were among the last dinosaurs, along with Triceratops, Tyrannosaurus, and others.  Pachycephalosaurus is the namesake of the family and the largest of them, and is relatively rare in the fossil record. What scientists do know about this animal is that it had a very thick, bony skull that exhibited extreme plasticity during its lifetime.

Fossil of the Week: Pachycephalosaurus

Without any question, the skull is the most interesting part of the Pachycephalosaurus skeleton.  For one, it is one of the most unusual dinosaur skulls, with a large bony dome on top that is extraordinarily thick.  The skull is really the only part of Pachycephalosaurus that is well-studied.  Few bones of this animal other than skull parts have been found, although one specimen “Sandy” is over 50% complete although it has not been described scientifically as of yet.  The cast made from this fossil is displayed at the Rocky Mountain Dinosaur Resource Center in Woodland Park, Colorado, a museum built by the paleontologist who discovered “Sandy,” Mike Triebold.  The original fossil was sold to the National Science Museum in Tokyo, Japan.

So, back to the skull.  Up to 10 inches thick, it was certainly suited for ramming other creatures, and most scientists believe that it very likely used the skull as a weapon.  Some paleontologists are not convinced that it would engage in head-on collisions like some animals do today, but rather used the skull to butt into the flanks of animals, whether as a defense mechanism or in mating rituals, or both.

In 2009, well-known paleontologist Jack Horner proposed an interesting theory.  At the end of the Cretaceous period there were three known pachycephalosaurs: Pachycephalosaurus and two more recent discoveries, the slightly smaller duo Stygimoloch and Dracorex.   What Horner found was that only adult specimens of Pachycephalosaurus had been found, and only juvenile specimens of Stygimoloch and Dracorex had been found, and these dinosaurs all lived at roughly the same time and place.  He proposed that all three “species” were actually one species of dinosaur whose skull underwent fairly dramatic changes during its lifetime.

Dracorex had a skull with quite a few similarities to Pachycephalosaurus, but some major differences, too.  It shared the bumps, horns, and spikes but they were shaped differently and Dracorex did not have a bony dome on top.  How could this dinosaur end up looking so different as it reached adulthood?

If you are interested in Horner’s theory, I recommend you watch a short (20 minutes or so) video of his TED talk about shape-shifting dinosaurs.  Here is the link:

For paleontologists, the debate is not entirely settled, so for the time being Stygimoloch and Dracorex are suspected as juvenile forms of Pachycephalosaurus.  The question of how the animals used their unique skulls is also still open to debate. Hopefully more specimens will be discovered so we can learn more about these interesting dinosaurs.