Like many states in the American west, Oklahoma has been the site of numerous fossil discoveries over the past century.  For many years, the state was known primarily for the discovery of Permian period reptiles and amphibians, but Jurassic and Cretaceous dinosaurs have been found in increasing numbers over the past few decades.  The Sam Noble Oklahoma Museum of Natural History has some terrific displays featuring a number of these discoveries as well as other prehistoric animals from the southwest.

Located on the University of Oklahoma campus in Norman, the Sam Noble Oklahoma Museum of Natural History (OMNH) is a beautiful museum that offers the public some terrific fossil displays, including a memorable Jurassic battle scene featuring two of the largest combatants during the height of the dinosaur era.

Before entering the Hall of Ancient Life, visitors can enjoy a beautiful sculpture of a large mammoth in the circular lobby outside the exhibits.  Once inside, the path through the exhibit starts with the most recent prehistoric animals and ends with some of the oldest–an exploration of Permian, Carboniferous, and Devonian-period fossils.

One of the nicest things about the Sam Noble Museum is the quality of the displays.  There are certainly museums with more fossils on display, but not a whole lot that are more visually creative and fun.  The Hall of Ancient Life has some really terrific scenes depicting ancient animals battling with their adversaries.  One of the first in the gallery is a scene from the relatively recent Pleistocene epoch where the great sabertooth cat Smilodon leaps toward a fallen Bison while the giant short-faced bear Arctodus threatens from the other side.  It’s a very dynamic display, and the Smilodon pose in particular is fantastic.

There can be no doubt that one of the great highlights at OMNH is the incredible dinosaur the museum still refers to as a Pentaceratops, but which has recently been classified as a new genus of dinosaur called Titanoceratops.  While Titanoceratops was a large ceratopsian dinosaur which is usually interesting enough, what makes the display truly incredible is the size of its massive skull–it is somewhere around 9-10 feet long and weighs close to seven tons!  I have seen a lot of dinosaurs in my travels, and a number of them have left me in awe.  I don’t think any fossils are more memorable to me than the skull on this animal.  It is truly jaw-dropping and worth the price of admission itself!

After visitors recover from the shock of seeing the world’s largest dinosaur skull, they will go around the corner and see another terrific dinosaur display.  Tenontosaurus was a plant-eating dinosaur in the Cretaceous period, and the scene at the OMNH depicts an adult trying to protect its numerous offspring from two hungry predators, in this case the frightening raptor Deinonychus.  It’s another vivid scene, sure to draw reactions from visitors, particularly younger ones.  I distinctly remember the “circle of life” discussion with my youngest son that commenced while we enjoyed this scene.

The largest gallery in the hall that follows is home to two of the largest animals that most likely faced off during the Jurassic period.  A super-sized apex predator Saurophaganax is shown attacking the largest Apatosaurus ever discovered.  This huge sauropod was found in Cimarron County in Oklahoma’s pandhandle.  Under the Apatosaurus stands the predator’s likely target: a young Apatosaurus, a relatively rare museum display.  Many paleontologists doubt that a single predator, even a huge one like Saurophaganax, would dare attempt to take on an adult Apatosaurus.  One crack from its whip-like tail could deal a fatal blow, and the sheer size and weight of the sauropod would have made this giant a very difficult foe.  A single lion today would not normally take on an adult elephant, giraffe, or cape buffalo, either.  Groups of lionesses, however, often threaten herds in the hope of  separating a juvenile, sick, or elderly animal that is more easily taken. 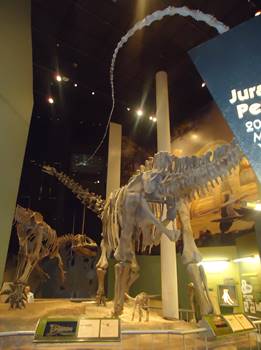 This raises some interesting questions about both animals.  Did adult sauropods protect juveniles?  There is some evidence from footprints that juveniles traveled alongside adults, so it could be presumed that they provided protection from predators.  The evidence is certainly not conclusive, however.

As far as the predator goes, did Saurophaganax or its close relative Allosaurus (in fact some think Saurophaganax is a large species of Allosaurus) hunt in packs, or at least do some form of cooperative hunting?  There is evidence that Allosaurus took on very large prey, and it seems likely that such a hunt would have involved at least two or more predators.  While these questions continue to be debated, displays like this one at OMNH help guests visualize these impressive animals and inspire people to think about the ecosystem in which these animals lived.

One of my favorite areas in the Hall of Ancient Life is the Permian exhibit.  Many reptiles and amphibians have been discovered in the red rocks of the Permian in Oklahoma, and not surprisingly, there are some great specimens on display here.  The Dimetrodon is a really wonderful specimen and is displayed beautifully.  Nearby is a very impressive Edaphosaurus, another ancient synapsid that, like Dimetrodon, was closely related to the animals that would later evolve into early mammals.

Of all the Permian fossils on display, one of the most interesting has to be an animal that museum staff refers to as “cup nose,” a large-bodied synapsid with a very small head called Cotylorhynchus.  It is assumed that this animal likely lived on land yet it had hands that appear to be shaped like large paddles.  This could mean that it actually lived an aquatic lifestyle, or possibly indicate that it had relatively recent aquatic ancestors.  Whichever the case, it is certainly one of the more unusual animals from the Permian period. One thing we know for sure is that Cotylorhynchus lived in Oklahoma–the museum holds the holotype specimen which was found less than 30 miles from Norman.

Other nice fossils on display at the Sam Noble OMNH include a large Gomphotherium, a shovel-tusked proboscid that looked in many ways like a modern elephant; the Permian period amphibian Eryops, a mid-size animal with a large head full of teeth perfectly designed for catching fish, and a terrific exhibit featuring turtles, mosasaurs, and bony fish from the Cretaceous era.  The Xiphactinus display is among the best anywhere; the fossil fish “swims” above a seafloor that contains another fossil Xipactinus!

Besides the Hall of Ancient Life, there are several other nice exhibits at OMNH.  Two particularly stood out: the Hall of Natural Wonders has some beautiful dioramas featuring wildlife displays from various Oklahoma landscapes, and the Hall of World Cultures features artifacts from all across the globe and throughout much of human history. Otherwise, the heart of the University of Oklahoma campus is just north of the museum, and Norman has all the shopping and food you might expect in a good college town.

Many of the displays at the Sam Noble OMNH are really great.  The scenes are dramatic and well-designed.  There are lots of signs near the displays that help educate visitors, and there are plenty of features designed to engage young children throughout the exhibit.  The only thing I can think of that this museum could really use…is a mount of the state dinosaur of Oklahoma, and one of my personal favorites, the king of the Early Cretaceous Acrocanthosaurus.  The Saurophaganax on display comes from Oklahoma and was discovered by University of Oklahoma researchers in the early 1930’s.  In the year 2000, Saurophaganax became the designated state fossil of Oklahoma.  In 2006, however, Acrocanthosaurus was designated the state dinosaur of Oklahoma, as its remains are known primarily, though not exclusively, from the state.  The museum has Acrocanthosaurus bones in its collection–now it needs to get the other well-known huge predator from Oklahoma into the Hall of Ancient Life!

My children have visited twice, and both times they had a great time.  OMNH does a nice job with interactive stations sprinkled throughout the exhibit areas that allow children to touch bones, play guessing games, and generally learn about the fossils on display.  As far as the fossils, both of my sons were very impressed by the Titanoceratops.  My oldest son liked the Saurophaganax display, my youngest was most impressed by a hallway featuring a Carboniferous “forest.”  One of our visits was to see a traveling exhibit called “Chinasaurs,” which featured a number of Chinese dinosaurs, many of which are rarely displayed in American museums.

The Sam Noble Oklahoma Museum of Natural History is a really good museum with some wonderful displays that will hopefully continue to expand as paleontologists find more important fossils in the Sooner State!